In order to use Unicode maths in pdflatex as well as in LuaTeX, in preamble of my document I have:

This allows one to have an arxiv.org-submittable document (arxiv.org does not do LuaTeX).

However, I wonder whether there is actually a package I can use instead of manually writing out all these \newunicodechar{...}{...}, as it looks pretty standard to me.

I would not do this. The source is far clearer if you use the command forms (even if using unicode-math with LuaTeX).

However, you can input unicode-math's unicode-math-table.tex, inverting its normal definition so that it defines the character to expand to the command rather than the other way around.

It is unrelated to the main issue, but most of the autogenerated preamble shown was unnecessarily complicated or redundant. pdfTeX defaults to UTF-8, so inputenc isn't needed. TeX ligatures are the default, so it doesn't need to be specified. ifxetex and ifluatex are legacy packages that now do the same thing and both just load iftex. 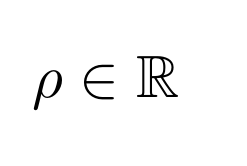 Note that even this small example highlights some issues with using the characters. I took rho from your question, but you used U+03C1 which is the standard ρ which unicode-math sets up as \muprho (math upright rho), the math italic rho being U+1D70C 𝜌. I assumed you didn't want the distinction in pdfTeX and added \let\muprho\rho and left it to the pdflatex math font setup to decide if that is italic.

So you may find that you still need to add several definitions, but at least inputting unicode-math-table defines the bulk of them and any remaining definitions, as here, can be written just using TeX command forms, not needing to refer to code points.

Not the answer you're looking for? Browse other questions tagged math-mode unicode or ask your own question.

276
Entering Unicode characters in LaTeX
25
Unicode in the equations: pros and cons