On a few pages I found that the command for a clockwise arrow should be \circlearrowright:

I am using the package amsmath and additionally tried mathcomp. What do I need more?

According to the current version of the document "The Comprehensive LaTeX Symbol List", maintained by Scott Pakin and featuring more than 18000 symbols and associated macros, the following six packages provide macros called \circlearrowright and \circlearrowleft for use under pdfLaTeX:

If you employ the unicode-math package (and hence either LuaLaTeX or XeLaTeX), there are several unicode math fonts that provide macros called \circlearrowright and \circlearrowleft directly -- no need to load a separate math font package.

Can't resist to show the other possible way to find it, at https://detexify.kirelabs.org/classify.html: 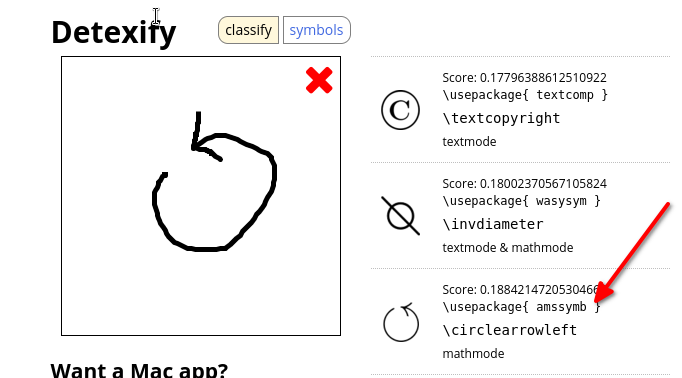 I have the app on my phone and it's a lifesaver when writing math...

Not the answer you're looking for? Browse other questions tagged symbols arrows or ask your own question.

22
Is there a package that has the "clockwise gapped circle arrow" in it?

2
Finding the package of a Detexify Symbol
7
Dashed left arrow over symbol
14
How to get the opposite direction of \rightsquigarrow?
2
How to create a variant of "\leadsto" symbol with bigger arrow tip?
0
Plus Sign Too Big; How to Call adfbullet?
17
Symbol for negated exclamation mark
11
What is the "not less than" operator in LaTeX?
5
How to write the L-shaped symbol in latex?
4
Is there a intermediate checkedbox symbol in LaTeX?