Absolute positioning in Beamer, with overlays, without TikZ

There are many similar questions to this here already (e.g., How can I make textpos respect beamer overlays? and beamer: how to use \pause with textblock* environment, and lots of questions on absolute positioning more generally), so let me try to clarify what I'm looking for, more specifically:

I don't think any of the previous answers address these two requirements (though if there is a solution here already, that would be great – if so, sorry for the noise).

The obvious solution is to use textpos, but as has been pointed out previously (e.g., in the two questions referenced above), it doesn't play nice with \pause and the like.

A simple MWE illustrates the problem:

This will give you three slides; the first says "BC", the second says "C" and the last says "ABC".

The problem is with the overlay option. If this is removed, and we use a transparent background, things work, so this is technically a solution, but as mentioned, I would rather not require this in my solution.

(Here I've also added \onslide<1-> so the rest of whatever is on the page, such as page numbers or whatever, isn't paused.)

This is almost what I want, except I would like the option of having (or letting others have) colored backgrounds. (I could of course draw those myself, from within the absolutely positioned box, but…)

So … any ideas of emulating or fixing the overlay option, or some other way of handling the issue of transparent backgrounds – or perhaps even some entirely different mechanism for absolute positioning, for that matter? (I tried leaving a bug report in the textpos repo, but that repo has since been deleted…)

I think maybe I have a solution, after all. It seems that simply using atbegshi with xcoffins (or l3coffins) is sufficient, and does the job correctly. In my code, I work with two coffins: One that is placed by atbegshi, at an absolute position, and another that is used to add contents incrementally to the first, possibly scaled, rotated, etc., using \ScaleCoffin, \RotateCoffin, etc., with configurable offsets and whatnot.

To just illustrate the basic functionality, however, here's a simple example using just a single coffin, placed at the center of the frame.

The three resulting slides are as follows: 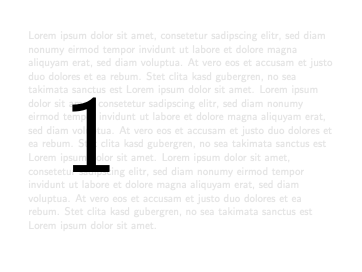 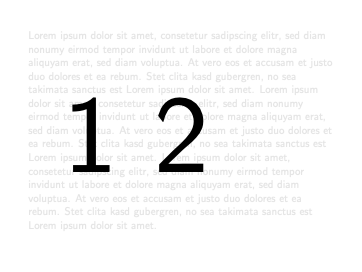 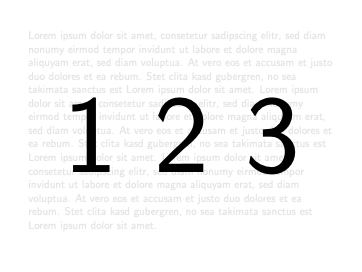 Not the answer you're looking for? Browse other questions tagged beamer positioning or ask your own question.

15
How can I make textpos respect beamer overlays?
1
beamer: how to use \pause with textblock* environment

1
Changing elements of arrays in Beamer without shifting the unchanging elements.
8
Beamer: handout/article mode - produce multiple copies of a frame with distinct overlay numbers
2
Beamer: problem with redefining the frames
1
Absolute positioning of a forest tree (with overlay-specifications) in beamer
1
Positioning list and pictures on Beamer frame
2
Customizing beamer using absolute coordinates
4
Beamer handouts with only / onslide and notes