AMS theorems in table of contents

I am using the amsthm package. I defined some enviroments like

To be more precise, say I have the following document:

I want my table of contents to look like this

You can incorporate the writing in the .toc file by defining an auxiliary environment; I use xparse because it makes easy to cope with the presence of an optional argument.

I've just figured out a solution which satisfies my needs regarding this problem (which were not satisfied by either of the previous answers here).

This requires the amsmath package, but not much else. In the preamble, we define a new theorem style which, when it is invoked with an optional note (or name), it adds a line with the name of the theorem to the table of contents. This way, only the most important results -- those worthy of being named -- actually end up in your table of contents.

Doing so, with a table of contents earlier in the document, yields something vaguely like that below: 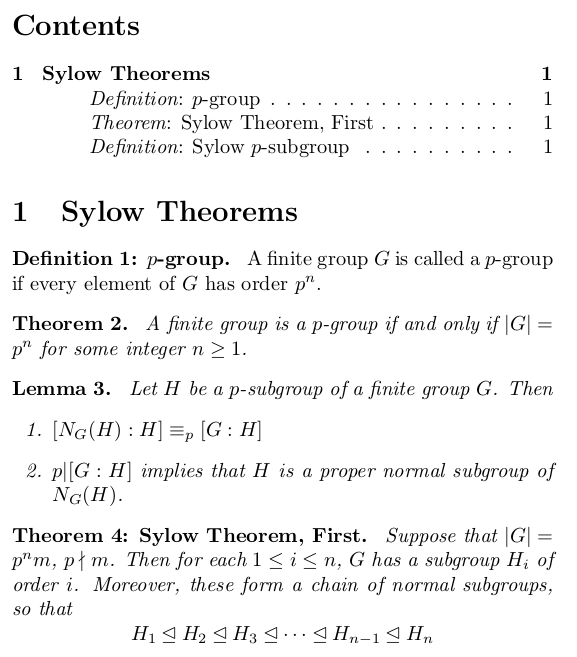 Not the answer you're looking for? Browse other questions tagged table-of-contents theorems amsthm or ask your own question.

80
Theorem/Definition/Lemma problem --- Numbering
4
Amsbook: Theoremstyles definition and remark identical?
12
Weird behavior of Partial TOC with titletoc
5
How do you modify LaTeX's sectioning hierarchy?
1
Numbering theorems as subsubsections
10
How to make the TOC's part entry in one column while the others in two columns?
1
Problem with shared numbering of theorems, propositions, etc. by section, ignoring subsections