How do I (temporarily) cancel centering?

There I was, a-merrily tracing through the depths of beamer's code on the trail of the Dreaded Overprint Hurler of Bexhill-on-Sea, when I came across Something Completely Different. It looked like a cross between a vbox and a centering, but horribly, horribly mutated.

Desiring to slay this monstrous beastie before it could wreak havoc, I studied it and its relatives (from a safe distance). Its behaviour is strange, but by caging it I could see some patterns in its responses to basic stimuli. Eventually, I realised that if I could but introduce some genetic mutation which temporarily switched off the \centering gene then it could be made safe and I could resume my quest to track down the Overprint.

Given that all of this is going on inside a beamer overprint environment, and I don't want to muck around with that code, the simplest solution seemed to be to turn off the \centering just before the overprint environment (and, given my reading of the original question, turn it back on again inside). But \centering seems to be a one-way trap: there's \centering, \rightragged, \leftragged, but no \backtonormal.

Here's some code to play around with:

Here's what I get from that:

The package ragged2e provides enhanced versions of \centering, \raggedright and \raggedleft (that you may or may not like), but above all makes available the command

that undoes the above declarations.

centering a full width box is a no-op and the text inside the box will be justified. 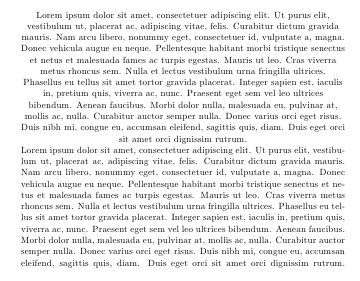 If you need a parindent then set it in the definition.

Not the answer you're looking for? Browse other questions tagged horizontal-alignment boxes or ask your own question.

5
Overprint environment inside tikz node: unexpected alignment of content
2
Table caption with centered small-caps title and fully-justifed description
1
TikZ: if everything is shifted, then all the shifts get reverted
1
Centering a line above a one-page document

15
Align minipage to baseline of first or last line inside minipage?
5
Centering contents after \unvbox
4
Strange centering
1
centering environment - detach some text from centering
14
Centering a \framebox
4
Centering two images but aligning them left
3
Centering text in box
3
Framed mini pages with shared inside border?
3
Why can't I center a group?
1
Extra alignment tab has been changed to \cr for TabularX centering