I'm using Will Robertson's leading package to set the leading in my documents. It usually works fine, but it seems to cause trouble with the vertical space between footnotes.* Consider the following example; the space between the footnotes is way too small.

It seems that while leading adjusts the leading within the footnotes just fine, it forgets to take care of \footnotesep as well. Body text is 12/16pt, footnotes are set to 10/13.3pt automatically (and correctly), but the leading between the footnotes, according to Acrobat Pro, is only 12.3pt, rather than 13.3, which is what I'm aiming for.

Now I wouldn't mind adjusting \footnotesep manually as a workaround, but \footnotesep isn't simply 12.3pt. Rather, in this example, \showthe\footnotesep tells me it's 8.4pt. In order to obtain the correct spacing, I need to increase it by about 0.9pt, but that's just a rough result of trial and error; I can't see the logic behind it -- which would be necessary in order to code a general workaround that works for all fontsizes.

But maybe a workaround isn't necessary at all; maybe I'm on the wrong track alltogether, so any hint is appreciated!

*) Leading, on a sidenote, IMHO is by far the best solution I've come across so far; I've been using it for years, and the only reason the following problem hasn't been a problem to me so far is that I've been using footmisc's para option, in which vertical spacing between footnotes isn't an issue, as all my footnotes (they usually contain mere references, author/year/page) are combined into one paragraph. Unfortunately, this seems to be confusing to some people who've read my stuff, so I'm thinking about going back to the traditional vertically stacked footnotes.

The following example uses etoolbox to patch the \@makefntext macro - responsible for inserting the footnote text. The patch is to insert a \strutbox before the inserted text. 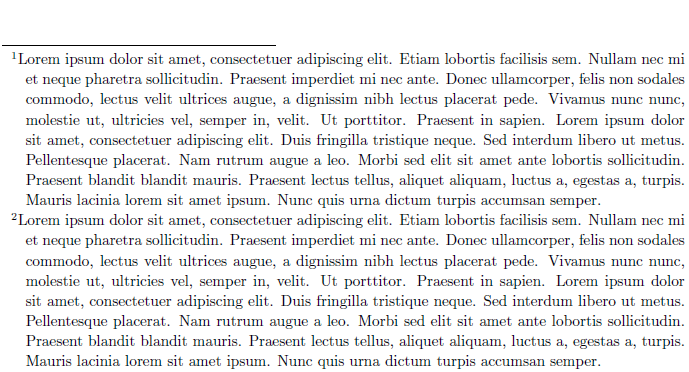 Not the answer you're looking for? Browse other questions tagged footnotes line-spacing or ask your own question.