I've noticed that en dashes and em dashes run into certain numbers and letters, and I don't believe it's standard to use spaces with these. For example, if a 'b' comes before the dash or a '6' comes after, the dash looks like it's actually touching the character unless you zoom way in. I know I'm being picky, but any ideas?

"In most text typefaces, em dashes have no side bearings, which make them appear very close to the words they separate" (James Felici)

The main problem is that, due to the stems in some characters, the dash looks not so close as in other chars. For example:

The dash looks much more separated from the 1 than from the 6. But if you draw the boxes around each char, you can see that it touches both boxes:

You can see now that the problem is in the "1", which has too much white space at its right. This is intentional, so that all digits have the same width. But in another font it could be different.

The problem depends on the font and on each character in the font. Thus, it is a kerning issue. Each font should define an appropiate kerning between each char and the dashes, so that this kind of effects is not noticeable. Unfortunately kerning information is stored in the font, and you cannot (easily) modify it from TeX (see here).

By the way, just in case someone cares, the code used to produce the above figures is the following:

With XeTeX, one could perhaps play with interchartoks (in plain-xetex): 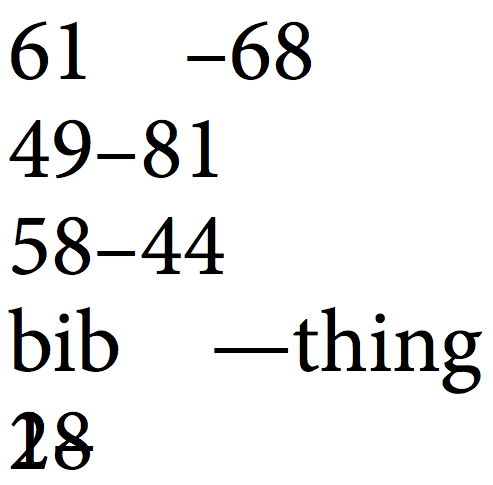 Note that the above is using an OTF font which has en-dash and em-dash in their Unicode positions.

You are right. I suggest to solve it this way:

Not the answer you're looking for? Browse other questions tagged spacing punctuation best-practices characters or ask your own question.

39
Is there a way to adjust kerning for a specific character combination?
10
Kerning for arabic digits?
2
pdfLaTeX solution to en dash kerning around numbers with newtx font