Inside arrow in xy package: steps

taken from this question here How do I deal with these scaling and positioning issues in Tikzcd,

how is it possible to obtain an arrow inside a segment using only xy package? 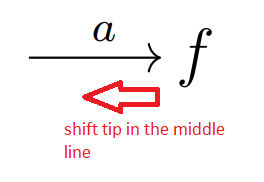 In xy-pic there is an arrow modifier \dir. Using this modifier you can draw the arrow with the tip in the middle as follows:

The command \dir doesn't appear in the xy-pic user manual. It is the xy-pic reference manual in which this command is documented. (I don't know why there are many manuals for xy-pic with different contents)

Not the answer you're looking for? Browse other questions tagged xy-pic xymatrix or ask your own question.