Where is the extra amount of vertical space generated by math delimiters in Tex Book Appendix G Rule 19 specified?

which renders with pdflatex to: 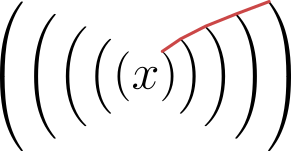 As \delimitershortfall is zero and \delimiterfactor begin over 1000 (where 1000 means do not change calculated delimiter size) I would assume that the delimiters (=parenthesis in this case) get larger by the same factor every nested level. I have added the red lines above to indicate that this is not the case. The factor by which parenthesis grow is not constant. Digging into TeXBook Appendix G Rule 19:

That confirms my assumption -- up to a certain degree: In the example there should be an increase of 1100/1000 spread evenly to height and depth as the delimiter is vertically centered around axis and as axis is at the point where height and depth meet, according to page 150:

If you look closely at the examples of math typesetting in this chapter, you will notice that large parentheses and brackets are symmetric with respect to an invisible horizontal line that runs a little bit above the baseline; when a delimiter gets larger, its height and depth both grow by the same amount. This horizontal line is called the axis of the formula;

Well, the assumption is confirmed except for the words "at least" above. TeXBook says the delimiter grows "at least" max( delta / 1000 * \delimiterfactor, delta - \delimitershortfall). That, to me, makes rule 19 under specified as it is not stated how big at least is and the example shows that it is neither zero, nor constant across nested levels, at least for pdfTeX implementation.

So my question is: Where (in TeXBook or elsewhere) is that "at least" specified and is there a way to change any TeX primitive configuration / implementation to control that amount, ideally setting it to zero?

EDIT: Thanks for @david-carlisle and @egreg for pointing out in detail that and how, according to your understanding, TeX requests a certain character (at what font size?) by the cm font and does not further scale that character to the user desired size.

To clarify: The extra amount of space in my question title is referring to the additional height/space between the user desired size of the delimiter calculated by the max(..) term and the height of the delimiter shape TeX will render, which, in rule 19 is described by the words "at least". I actually hoped that this was clear. So yes, according to your answer @egreg this extra space exists and comes from the fact that TeX in that case does not scale the delimiter as needed. The wording "Replace the current boundary items with delimiters whose height...", however, do not prohibit any scaling. In fact, I would have never assumed your described implementation by reading that wording. It is very clever though, to have different delimiter characters with different aspect ratios, such that a higher delimiter is not growing that large in width.

The gold standard of a \left and \right implementation in my point of view, however would be to select the next largest character the font delivers and scale that down to exactly match the max(...) value. The current implementation leads to unevenly growing nested delimiters, which does not look good IMHO. Here is another example at 12pt where it is even worse: 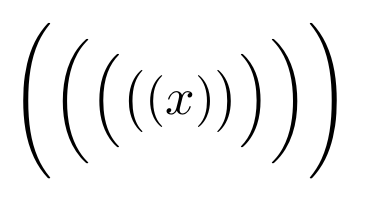 Comparing both images, one can see that even worse the amount of "at least" is different for the same nesting level of a different base font size.

Look at the \delcode for the closed parenthesis:

When \right) is used, TeX looks at the first half of the \delcode. If the character (family "0 and slot "29) fits into what's specified by \delimitershortfall and \delimiterfactor, TeX uses that character.

The specification is as follows. TeX determines the height h and depth d of the material to enclose; then it considers δ as the maximum between h − a and d + a (where a is the height of the math axis). The delimiter's height plus depth must be at least

Otherwise it tries the second half (family "3, slot "01); if it fits, then that character is used. Otherwise TeX looks whether the metric for this character have a NEXTLARGER specification and indeed we find (from tftopl cmex10)

(the characters are numbered in octal). Yes, there is; so the lookup is with the character in slot '21 that has

and TeX can go further if needed

Now something different happens, because character in slot '61 has

At this stage, if the previous attempts don't give a suitable result, the parenthesis of the appropriate size is built with the top, bottom and repeater as specified.

So there is no “extra amount of vertical space” to be described, because there isn't any. And there is no scaling. The sizes of the series of parentheses in cmex10 increase linearly; why the ratio of the height of the parenthesis in cmr10 and the initial one in cmex10 does not agree with that linear increase should be asked to Knuth.

Not the answer you're looking for? Browse other questions tagged math-mode delimiters or ask your own question.