Trying to have a better understanding/controlling over \expandafter, I wrote this code.

This outputs the sequence of numbers:

After a long time thing about such result and after a look on Internet, I've concluded: that makes no sense to me.

Could someone help me to understand such output?

\count100 is initialized to 0. TeX is in vertical mode. We have three sequences of delivering the value of \count100 and afterwards incrementing \count100: When processing \the\count100 coming from the first \c, you get the token 0. Processing that token causes TeX to typeset it and to hereby switch to horizontal mode and thus to carry out \everypar, which in turn resets \count100 to 0. Then the pending \advance\count100 by\count101\relax, also coming from the first \c, is carried out so that \count100 has value 1. The second and the third \c each yield typesetting and incremeting the value of \count100, so that you get 1 and 2 and in the end \count100 has value 3.
(\expandafter just yields that the toplevel-expansion of the second \c is delivered before expanding the first \c but that does not matter: the first \c does not use tokens belonging to the toplevel-expansion of the second \c as arguments.)

So in the end you have 012 and \count100 has value 3. When "0" was processed, TeX switched to horizontal mode for typesetting a paragraph and hereby reset a register whose value was 0 to the value 0. When the empty line was encountered, the paragraph was finished and TeX switched back to vertical mode.

Here \expandafter yields that toplevel-expansion of \c is delivered before TeX sees the curly brace which opens up the local scope. In this case it doesn't doesn't make a difference for the final result. In any case TeX is still in vertical mode and opens up a local scope. Inside that local scope \the\count100 coming from the first \c delivers/prints the token 3 as that is the current value of \count100. When TeX processes that token, TeX starts a new paragraph by switching to horizontal mode. Thus \everypar is executed and count-register 100 is reset to 0. The subsequent \advance \count100 by \count101\relax, also coming from the first \c, increments count-register 100 by 1 so that now it has value 1. The subsequent/second \c prints that 1 and increments count-register 100 by 1 so that now it has value 2. The closing brace closes the local scope: Now the value of count-register 100 is back to 3. The third \c prints the value "3" and increments the register so that now it has value 4. The subsequent empty line finishes the paragraph and TeX goes back to vertical mode.

Here \expandafter causes TeX to look at { (which is not expandable) before looking at the first \c, thus \expandafter has no effect.

Again \expandafter causes TeX to look at { (which is not expandable) before looking at the first \c, thus \expandafter has no effect.

The second thing to realize is that each \expandafter accomplishes exactly nothing (will explain later), so for purposes of understanding the output, they can be ignored.

With this set, the first invocation of \c in each paragraph will start with \count100 equal to 0. In the first case, \c\c\c, it behaves as expected, with an initial reset to 0, and an increment of 1 with each invocation.

The second case {\c\c}\c resets to 0 inside a group, accounting for the initial 01 in the output. However, when the group ends, the reset is confined inside the group, so that the third \c increments from what was left on the prior line, which was a 2 incrementing to 3.

The third line \c{\c}\c has a similar behavior. The count is reset to 0, it increments to 1 just prior to entering the group. But, upon group exit, it only recalls the pre-group value of 1, and so the final \c again prints 1, before incrementing.

In the last example, the invocations produce a 012. However, the value of \count100, upon exiting the group, after the third invocation, is still 1, which is what the counter was incremented to just before entering the group.

Now let us understand why the \expandafter accomplishes nothing. Acting upon \c, it merely substitutes the definition of \c for the token \c. However, \the\count100 is still not executed (or even the \leavevmode). Thus, it has no effect on pre-expanding anything inside of \c. In some cases, you aren't even expanding \c, but trying to expand {, which does nothing.

Finally, let us return to the OP's original case, which omitted the \leavevmode (\expandafter is still useless). Now, the count reset associated with \everypar is not executed until vertical mode is left, which doesn't occur until the initial \the\count100 is encountered in the first invocation of \c.

So, the first line acts as expected, only because \count100 is initially equal to 0.

For the 3rd line, the 4 reflects the value at the end of the prior paragraph, which is reset to 0 after the 4 is typeset. Thus, the second \c produces a 1. However, the last \c also produces a 1, because the increment of the count inside the group is lost in the scope.

Similarly, for the last paragraph, the initial 2 is left over from the end of the prior paragraph, and then the count is reset to 0. Therefore, the 2nd and 3rd invocations yield a 12.

If I understood what it was you were trying to accomplish with the \expandafters, I might be able to help, but it is not clear to me what you are hoping to have happen.

First and upmost: your \expandafter does nothing at all.

If you're hoping that it causes \count100 to be stepped before the first \c instruction is reexamined, your expectation is wrong. Indeed, after expanding \expandafter, TeX will see the token list (line breaks just for readability)

and it will proceed to expand \c according to its definition. So you'll get

Finally, \hfil$..$ is processed. Now comes a \par that ends the paragraph. OK, you now have

(whatever comes after \hfil is essentially immaterial). Also in this case \expandafter does nothing sensible and TeX ends up seeing

OK, a group is opened, TeX expands \the and realizes that this causes a character token to be processed. This character token is 3, that is, the value of \count100 at the moment. Since this would start a paragraph, the contents of \everypar is delivered after providing the indentation box; the counter is reset to 0, but \the\count100 has already been expanded, so the result is

Now you can go on and explain the next output, I've already shown that 012 and 313 do make sense. Likely not what you expected, but…

Point 1 is really important. You may try to explain what you get with

I removed the \expandafter tokens because they do nothing sensible; \noindent will cause \everypar tokens to be delivered and \quad makes for a clearer output. 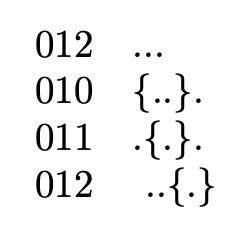 Not the answer you're looking for? Browse other questions tagged plain-tex primitives sequence expandafter or ask your own question.