Are \onehalfspacing and {spacing}{1.5} Supposed to Yield Different Results?

I am working on a document which requires for a very small portion of the text, that the spacing between the lines be increased. However, and I don't know why, the \begin{onehalfspacing} ... \end{onehalfspacing} does not work.

Thus, I sought out an alternative approach, and came up with \begin{spacing}{1.5} ... \end{spacing} which definitely increased the spacing between the lines in the document I am working on.

However, in trying to figure out why the first approach was not working, I discovered that the two approaches yield different results.

which produces the output: 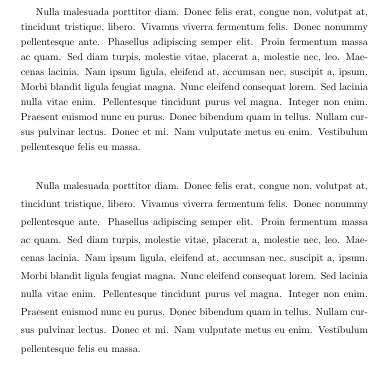 Now, the way I am seeing it, the two results, which I thought should be the same, are different.

QUESTION: What is causing the discrepancy between the two outputs; and which of the two renders a more accurate output of one-and-a-half spacing? Finally, if \spacing{1.5} is not accurate, does anyone know the scaling factor I should use to make it as close to one-and-a-half spacing as possible---as this approach works in my document whereas \onehalfspacing (for some unbeknownst reason) does not.

The environment name is onehalfspace, not onehalfspacing AND, it is (for a 10pt document) equivalent to \begin{spacing}{1.25}. 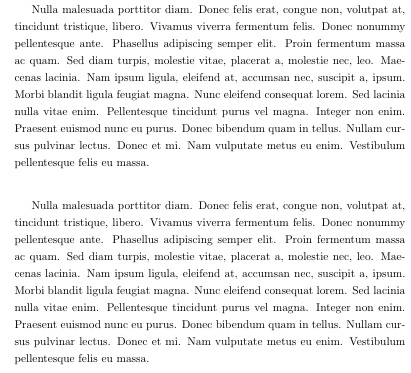 Here is the relevant code from the style file:

The command name convention is explained in the package comments eg

so note it is 150% of the nominal font size, not of the original baseline spacing.

Not the answer you're looking for? Browse other questions tagged spacing line-spacing scaling output setspace or ask your own question.

84
What does 'double spacing' mean?
3
Vertical spacing between sidenotes (and, between sidenotes and captions) in tufte-book
6
Inline math spacing and varying interword spacing
7
Different line spacings for main text and footnotes in beamer
6
Combine single and double space
1
Inconsistent linespacing of main text around block quotes
1
How to increase the line spacing of the \begin{proof} environment?
0
Spacing between horizontal lines in a title and spacing in general