3D TikZ lines on the perimeter of a circle

I'm just learning TikZ, I've done a few 2D images and I wanted to make a 3D wire frame of the Hubble telescope. The body of the telescope is basically a pair of tubes, the front one slightly narrower than the other. I had thought to draw a series of circles and then put lines along them to create a cylinder.

The problem is, my lines don't fall on the perimeter of the circles. I the circle command to draw the circles on the (y,z) plane while x varies along the length of the telescope. I had thought to calculate end points for the lines use the equations y = radius * cos(\theta) and z = radius * sin(\theta) but the lines turn out to be slightly off the surface of the cylinder. I've tried a bunch of different things. One really strange thing ( to me) is that if I specify the radius in centimetres for the line calculations the lines are Way off the cylinder. Even though the radius is specified in cm for the circles. 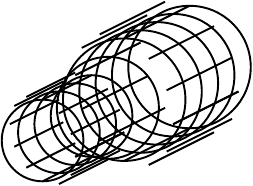 This is probably the solution that requires the minimal amount of modification to your original code:

A you can see, the trick is to specify as the 'active canvas' the yz plane each time you draw a circle at a new x coordinate. Now the radius and the center of the circle can be specified in the usual 2d fashion.

You will need to load the the 3d TikZ library to make it work (insert the line \usetikzlibrary{3d} in the preamble, naturally after loading the TikZ package).

The lines will remain consistently on the circles even if you change the perspective parameters.

How about this: I make the circles grow along the z-axis. The small circles are of radius 1, the bid ones of radius 2, the z-separation of the circles is 0.6 units. From polar coordinates we know that x=r cos(phi) and y=r sin(phi). I don't know if you want this to be customizable, but this could be easily added. 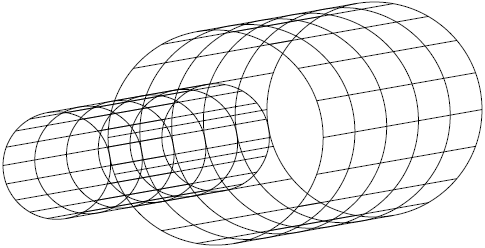 Not the answer you're looking for? Browse other questions tagged tikz-pgf graphics 3d or ask your own question.

29
Drawing a circle on a non xy-plane with TikZ
9
Specifying the transformation matrix TikZ uses manually?

22
Tikz Polar Grid
15
TikZ, 3d library and circle fading
10
Is it possible to draw a 3d cylinder using TikZ-3dplot?
8
Decorate with text along the perimeter of a circle using TikZ
17
TikZ: Drawing an arc from an intersection to an intersection
0
Drawing lines to the correct circle
4
Tikz - Drawing a partial circle between two lines
19
Rectanglar cloud shaped node in TikZ
10
Drawing lines within circle using TikZ