The math accents are usually taken from textfonts (only \vec from the math italic font). I would like to have an italic accent over an italic letter also in math mode. To present the problem quickly I load the text italic font into fam0.

This results in bad positioning of the italic accent. What is happening?

I don't understand that.

Edit: The skewchar should solve all the problems with the accent spacing, shouldn't it?

I'm not sure what would be the reason for doing it: the math accents are symbols on their own and don't depend on the accentee. Anyway, your approach is flawed: see the lines 2 and 3 above the rule. And the fix I propose. 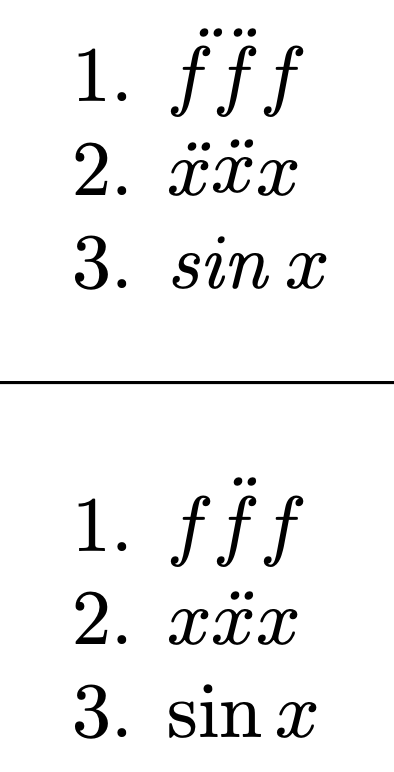 The double-dot accent character in font \tenit is itself skewed to the right, and this effect is added to the \skewchar correction of the \teni f, moving it too far to the right in total.

After reading rule 12 in appendix G of The TeXbook, I found that you can avoid the \skewchar correction by replacing the single character f with a \mathpunct f (not \mathop, because that might center the character vertically). Alternatively, you can set \skewchar\teni=-1. The italicized accent is then somewhat more to the left than the straight accent.

If you don't like that, you can use a non-math accent.

Not the answer you're looking for? Browse other questions tagged math-mode fonts plain-tex math-fonts computer-modern or ask your own question.

31
How would one design a math font?
3
Accents not positioned correctly over rsfs letters
33
How to correctly set up Palatino font with math (related to pxfonts)
3
Adding default \skew to math accents
8
Math kerning with non-math OpenType font
0
Set the default math font back to the original
12
Beamer metropolis theme, recommend a math font that matches with Fira
4
How to design math accent positions correctly?
3
\hat{} and \tilde{} commands result in misaligned accents with bold math symbols
2
How to trim space around italic `f` in unicode-math