What is best way to mention that a document has been typeset with TeX?

Is there any common way to mention that a document has been typeset by TeX? So non-TeXnicians (TeXperts) may become a little familiar with the TeX world.

Update: It would be nice if one hero make a package that insert such information in a beauty and concise manner in a given language, so even lazy TeXnicians will credit TeX . For example:

TeXies have a good chance of recognizing TeXed documents, especially if Computer Modern (or Latin Modern) is used. But assuming you want to convert Word-users and other heathens, figuratively speaking, you could use a colophon, a "brief description of publication or production notes relevant to the edition, in modern books usually located at the reverse of the title page, but can also sometimes be located at the end of the book" (Wikipedia). Some of the theses listed at Showcase of beautiful typography done in TeX & friends have such notes:

This thesis was typeset using the LaTeX typesetting system originally developed by Leslie Lamport, based on TeX created by Donald Knuth.

Typeset by the author in Fedra Serif B using LaTeX. Cover design by Sam Ross-Gower.

And here's a particularly pretty one: 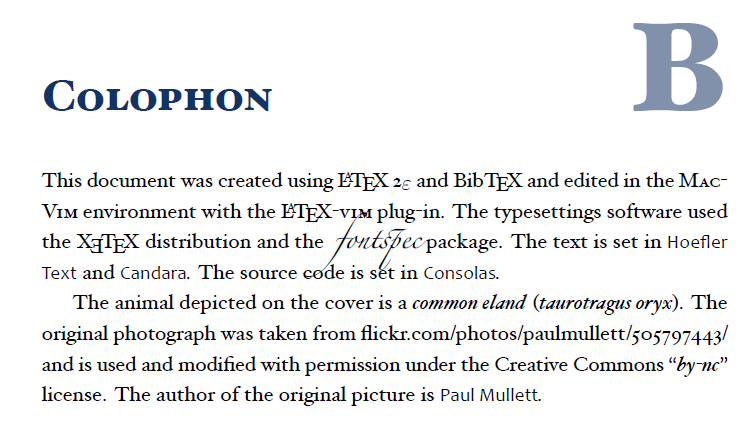 Here's another cool one from The Book of Tea by Okakura Kazuko as typeset by William Adams. Part of this book can be found as an example of TeX typography in the TeX showcase.

If you actually want to get people started by your notes (and not just potentially curious), I'd point them to Tobias Oetiker's The Not So Short Introduction to LaTeX2ε, and – obviously – to tex.sx.

Here's an angle: Don't do anything. Instead, have a look at the PDF information (in case of PDF output), in this example, Preview.app's cmd+i -window (sorry for the localization, but I hope you get the idea):

First of all: it seems a good idea to mention somewhere "Document typeset with LaTeX". Because your readers may realise that this is a well typeset document, but may have no clue how it has been produced.

Where you mention your machinery surely depends on your document. In a book the acknowledgements are the place to mention LaTeX or whatever. I a report maybe on the last page or the last footnote in smaller print? This seems a question of taste.

Not the answer you're looking for? Browse other questions tagged typography best-practices latex-misc teaching or ask your own question.

2
How to let the people know that my document was produced with/on LaTeX
2
How to acknowledge LaTeX and its community in a report/manuscript/dissertation/book?
944
Showcase of beautiful typography done in TeX & friends
575
How do I make my document look like it was written by a Cthulhu-worshipping madman?
12
What is the difference between TeXperts and TeXnicians?
4
How do I cite LaTeX in BibLaTex?