How to make “sub-level” numbering for listings, similar to subcaption?

I think what I'm trying to do may be complicated, so if not all of it is possible then that's OK. I'm using the listings package and I've done something similar to Custom numbering of listings elsewhere on tex.sx, where listings are numbered 2.a 2.b 2.c, but I'd like it to be better. I've drawn a picture of the output I'd like to achieve (the coloured boxes are just for illustrating the idea): 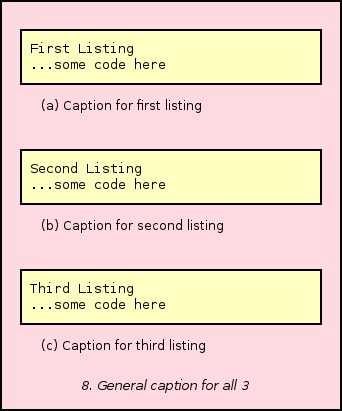 Each "sub-listing" has a letter and then there's a number at the bottom for all three of them together. I'd like to be able to refer to the sub-listings so that 8.a or 8.(a) or whatever is shown in the document.

I tried (and failed miserably) to do this by adapting examples from the subcaption package which used figures and images, but compilation failed with "Missing number, treated as zero", probably because I have no idea what I'm doing with subcaption. What I tried with sub-caption was something like:

A lot of subcaption seems to deal with putting things next to each other, but as these are listings I'd like them above each other like normal, and only used subcaption to try to get the numbering to change. I also have a List of Listings and it would be great if in there, these a, b and c listings were indented after #8, as happens when you make sections and sub-sections in the Table of Contents.

Any help with this will be greatly appreciated.

This solution was taken from Gonzalo Medina, and the tricks 1 to 4 have been replaced by a different one:

This way we don't need an extra counter, no counter saving, no manual counter incrementation, no suppressing of the list entry, and no doing the list entry by hand.

(If the listings should not float just replace the figure environment by a minipage environment.)

P.S.: For details on \DeclareCaptionSubType just take a look at my subcaption package documentation.

If this special structure is to be used once or twice, a "manual" solution can be applied; the code below shows such a solution. 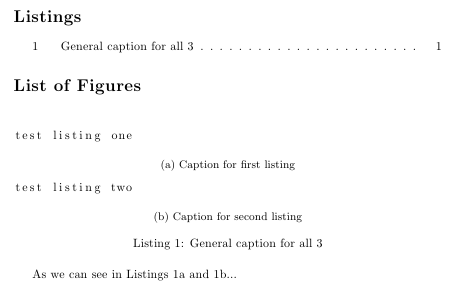 Not the answer you're looking for? Browse other questions tagged table-of-contents listings numbering subcaption or ask your own question.