How can I expand the x-axis by, say 1cm, in both directions in the following bar plot?

The problem is that I cannot get enlarge x limits with abs value to work when using symbolic coordinates.

The key abs value=bar defines the value which will be used if enlarge limits is active. It will be ignored if it is not active.

In addition, you may want to use xtick=data - otherwise pgfplots tries to place tick marks between the bars and assigns them to one of the bars.

To summarize: enlarge x limits={abs=bar}, xtick=data does the job. It works because bar is the second symbolic coordinate. As such, it has index 1. Since enlargelimits necessarily needs numerical values, it uses the index of the symbolic coordinate. Thus, abs=bar causes the limits to be enlarged by one unit - which is 2cm in your case. Note that foo has index 0 and would not have worked.

This "numerics on symbols" certainly stretches the feature to its limits. If you feel that you want, say, a half unit, you should seriously consider to go back to numerical coordinates, combined with something like xtick={0,1,2}, xticklabel=foo,bar,baz. It has the same effect as symbolic x coords, although the data files are less "speaking".

You can give enlarge x limits argument with a number between zero and one as a percentage. But also this would make the ticks repeat itself. To avoid that you also can give xtick=data option. 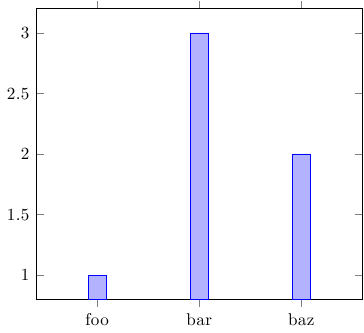 3
enlarge axes limits by fixed distance
2
How to make a pgfplots barplot not fuse with the y-axis?
4
Broken text on bottom of pgfplots
1
pgfplots ybar glued to the y axis

10
pgfplots stacked bar plot: distance to axis, padding between bars
18
plotting two time series with bounds
9
How to prevent rounded and duplicated tick labels in pgfplots with fixed precision?
7
How to hide empty (value 0) ybars with pgfplots?
9
pgfplots: percentage in matrix plot
3
pgfplots bar graph: Bars are floating above the x-axis
3
Center the axes in the coordinate origin
6
pgfplots ybar with discontinuity decoration on the x-axis line
1
Bar plots with small x-values