What is glue stretching?

I had a question about dynamic vspaces (Dynamic vspace depending on text height) and there was a hint I should use a stretchable glue.
Searching with Google didn't give me a helpful answer.

I would be glad, if someone can explain it and give me a simple example to understand how it works.

In TeX any glue is composed by a fixed part, a stretchable part and a shrinkable part. Each of these parts can be zero.

The general form to express a glue is: <fixed part> plus <stretchable part> minus <shrinkable part>. Each of these parts can be expressed in any of TeX units (mm, cm, pt, em, etc.). For example 2cm plus 2mm minus 1mm.

When composing a box which contains glues, TeX uses first their "natural dimensions" which is the fixed part (2cm in the above example). If the resulting box is underfull, then TeX expands all glue which has a non-zero stretchable part, up to the amount specified in that glue. In our example, the glue can stretch 2mm at maximum. If the box contains several glues with different stretchability, each one is stretched proportionally to the given stretchability. If the box is still underfull after stretching all glue to its maximum, a warning about "Underfull box" is issued.

Analogously, if the box is overfull, TeX tries to reduce the space by shrinking that glue. So, in our example, the final inserted glue can vary between 1.9cm and 2.2cm, depending on the size of the box which contains that glue.

It is very frequent that the "outer box" is the page, and the glue is vertical space between paragraphs or environments. LaTeX sets up things so that these spaces have always stretchable and shrinkable parts, so that TeX can adjust those glues and have tha last line of the page adjusted at its bottom.

The plus part in the glue can specify the value "infinite", through one of the following keywords: fil, fill or filll. Each of these infinites is "greater" than the preceding one. This deserves a detailed explanation.

If all glues in a box have finite stretchability, except one which has fil stretchability, then the whole box has infinite stretchability (it can never be underfull), and all the stretching required to adapt the box to a given size happens at that infinite glue. This is very useful, for example, to "push" the first and last line in a vertical box to the top and bottom, respectively, by inserting \vskip 0pt 1fil in between. In case of horizontal glue, this can serve to "push" the last words in a horizontal word against the right border of the box.

If one of the infinites is of greater order than the other (for example, one is 1fil while the other is 1fill) the higher order infinite "wins" and gets all the stretch, and the other glue is not expanded at all.

Note that there is a 1 in front of fil. This factor can be changed to any other number, and then TeX distributes the stretching proportionally to that factor. So, if we have a glue of 1fill at the beginning of a box, and another glue of 2fill at the end, when the box is stretched, the second glue expands twice, with the result of the other content being "centered" in the first third of the box.

TeX provides some shortcuts for using these infinitely stretchable glues. You can type \vfil as equivalent of \vskip 0pt plus 1fil and analogously for \vfill, \hfil (for horizontal glue) and \hfill.

Finally, the infinite stretchability can be also negative. In this case it cancels the value of other positive infinitely stretchable glue in the same box. This strange glue is useful to implement some kind of "conditional stretching", conditioned to a break happeninng or not between the positive and negative fills. If the break happens, the positive fill is expanded and the negative one discarded. If the break does not happen, both fills are canceled one with each other, and there is no glue expansion. \vfilneg is the shorthand for \vskip 0pt -1fil.

Which produces the following output: 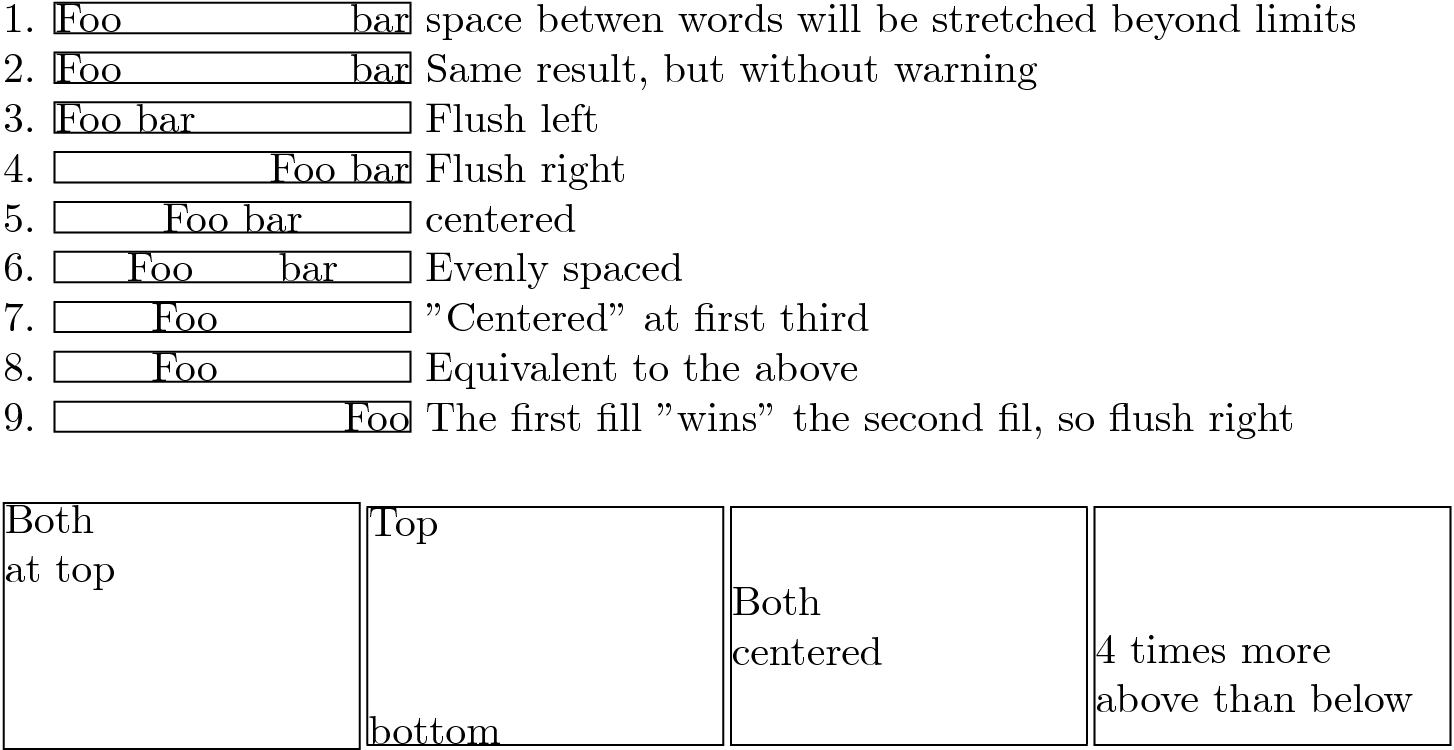 We can use the special keywords fil, fill and filll in the minus part of the glue, but, what would it mean? One could think that the minimum possible final value for the glue is zero, but in fact TeX can continue shrinking it to negative values. These negative values will cause overlap between the boxes separated by the negative glue. When one fil is specified for the minus part, the glue can be made arbitrarily negative.

This is useful for overlapping effects, such that the ones achieved by \rlap or \llap (which indeed are defined in terms of infinitely shrinkable glue, inside a \hbox of zero width).

TeX provides the shortcut \hss as an equivalent of \hskip 0pt plus 1fil minus 1fil. This is thus an infinitely stretchable and shrinkable glue, useful for special effects. For example, the macro \centerline is defined as a \hbox of the width of a line, with the content {\hss#1\hss}. The use of \hss instead of \hfill allows the content of the line to be larger than the line width, and in this case those contents will "spill" over the margins, the same amount in each margin, thanks of the two \hss.

The following MWE showcases some examples of \hss and its vertical counterpart \vss: 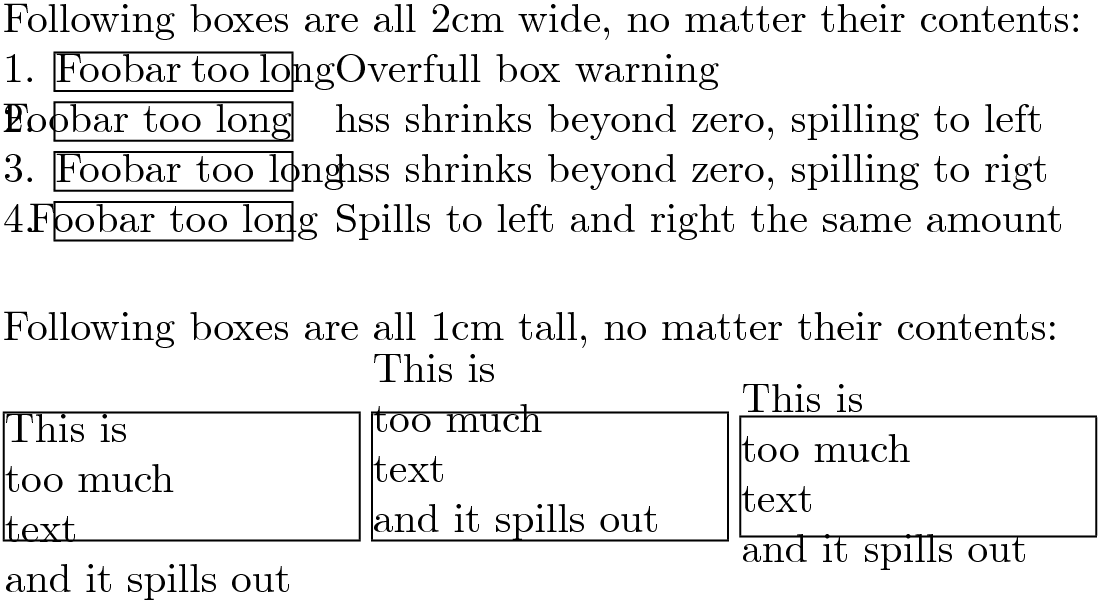 11
Why do we have something like "-3.5ex \@plus‎ -‎1ex \@minus‎ -‎.2ex" instead of a fixed value?
5
Does TeX use Hookean physical springs to represent positive and negative glue?
3
Why the redundant adding and subtracting inside space commands?
3
What is plus1filll?
88
Spacing before and after section titles
92
Formatting section titles
47
Where can I find help files or documentation for commands like \@startsection for LaTeX?
67
How to globally change the spacing around equations?
24
How do I write something at the end of the slide in beamer?
10
Annoying paragraph spacing issue with memoir
See more linked questions

8
Apply \intextsep at top of page
23
Non-invasive replacement for \fbox?
3
Control interword glue
12
Why is `\strut` working in these scenarios?
7
How to prevent TeX from stretching glue beyond a given maximum?
37
Obtain \badness or glue adjustment for each line
7
How to get "nonbreaking vertical space"?
14
Understanding ``\needspace``
3
underline (empty space) until end of line (manual "fill in the blank" to end of line), within enumerated environment
1
Is a \vspace placed on the end of a paragraph a bad LaTeX coding?