Normally, when you write text right after math mode, it prints with no indentation (that's the desired look), but with the following MWE, a small indentation appears 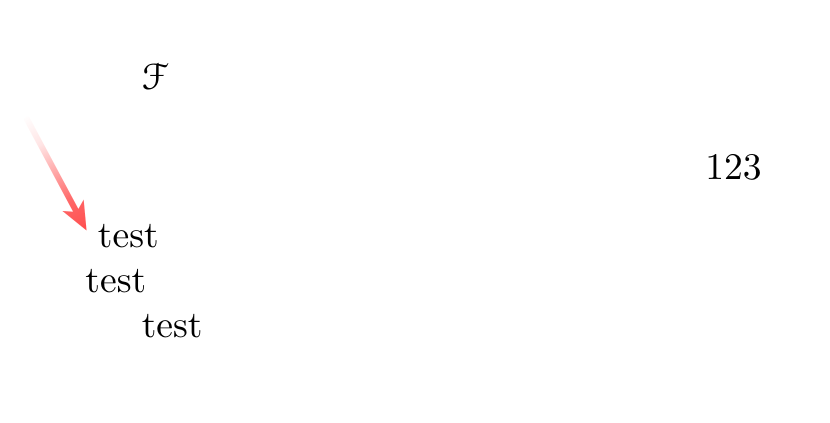 Note that basically commenting out any of the present packages solves the issue, as well as removing $\EuScript{F}$ in front of the math mode 123 formula.

What does cause such an unexpected indentation after math mode?

How can I fix the issue without eliminating any of the loaded packages and without adding \noindent or comment sign (%) after each math mode block?

As identified by David, the issue is due to localmathalphabets handling. It puts code after the display (via \aftergroup) and that prevents $$from seeing any following spaces and dropping them. Therefore they show up.

To answer the comments in the remarks: not all TeX primitives are officially supported in LaTeX, even if in internal code they are used (but with special precaution, for example, the $$...$$ constructs are followed by \ignorespaces in LaTeX code when necessary).

As a quick workaround until the problem is fixed in LaTeX, you can use

(or not use $$...$$ as recommended). For a final solution I have opened an issue in our bug tracker: https://github.com/latex3/latex2e/issues/886

The space isn't an indent it is a word-space from the end of line after $$. Normally spaces are ignored after $$ but aftergrouped tokens interfere.

This is an issue with new code added to avoid running out of math groups. An aftergrouped token restoring the math fonts is preventing the usual implicit \igorespaces after $$. We will probably fix this in the format, but note it is not a bug: $$ has never been supported syntax in LaTeX, and any LaTeX display math form, such as \[...\] or \begin{equation}..\end{equation} will not show this behaviour.

An earlier version of this answer fixed the example shown by adding \igorespaces at one point in internal LaTeX code. That wasn't quite right as it needs to be conditional on display math, so you don't lose space in $x$ and... . Making that conditional is a bit tricky: requiring changes elsewhere, so is not shown here.

If you choose to keep using $$ you can avoid the problem by disabling the new math alphabet feature by declaring:

until the underlying problem gets fixed, but note that you will then (as in earlier LaTeX releases) get an error if your document uses more than 16 math fonts (and it must already have used at least 14 to trigger this issue).

One reason your document uses so many math fonts is that mathtext interacts badly with hyperref. Your example (if you add \showoutput debug information) shows the math is set using PU encoding which is only intended for PDF bookmarks.

Probably you should report an issue to the mathtext package maintainer, and not use it in combination with hyperref unless that is fixed.

Not the answer you're looking for? Browse other questions tagged math-mode indentation or ask your own question.