How to make a diagram composed of superimposed layers where the viewer can make each layer visible or invisible independently of the other layers?

This question led to a new package:
ocgx

(I have edited the question as ocgtools looks like it is the right package to use, rather than animate.)

I am trying to use LaTeX with the TikZ package to make a diagram composed of four layers. The specifications require that the viewer can make any of the layers present or absent, so each layer will need its own on/off switch.

The animate package gives one set of control buttons and is suited to an application where layers are to be added in a predetermined order. Early attempts at making my diagram tried to use one animateinline environment for each layer so that each would have it's own set of control buttons.

I tried a test case of two layers using two animateinline environments, each displays only a blank canvas or one layer, and each has its own set of control buttons. Various attempts were unsatisfactory, including

Attempt 1: Inside of a figure environment, nesting an animateinline environment inside another one. This caused a compilation warning that when ignored resulted in no output.

This attempt has various problems: it requires manual fiddling to superimpose the layers, needs the layers to be made transparent somehow, and even doing that would mean the control buttons are superimposed, so it's necessary to find a way of changing the location of one set of control buttons.

An answer posted now indicates that the ocgtools will give a framework that doesn't require manual fiddling, allows for transparent layers and which allows the diagram creator to place links that can make each individual layer visible or invisible. Once I have determined that the suggestion works for my needs, I will report back and make this question more concise.

Below is some code for the unsatisfactory attempt 2 made using animate. Uncommenting the vspace command shows the problem of the opaque second layer sitting on top of and obscuring the first layer.

Last edit: With the invaluable assistance of Paul Isambert, I wrote the ocgx package.

Here is an example with ocgx package (available via CTAN and via TeXLive). 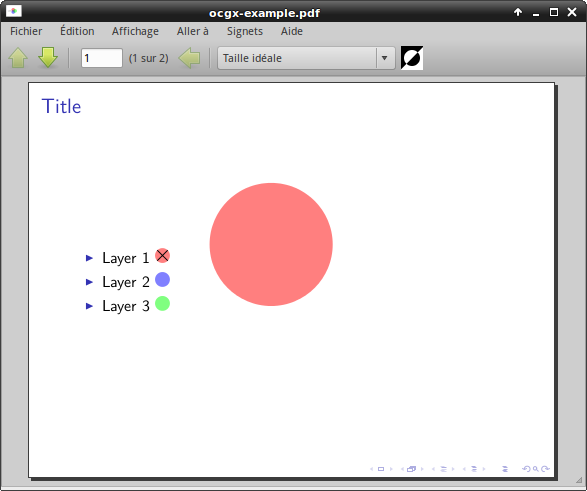 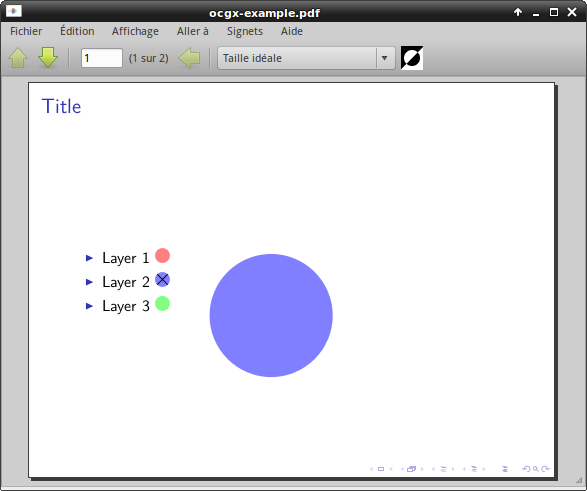 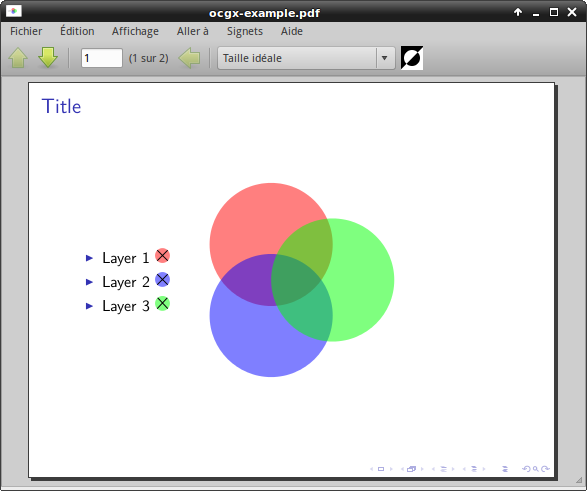 Here is an animate based solution with links that act as switches:

Not the answer you're looking for? Browse other questions tagged tikz-pgf animate or ask your own question.

35
Does TikZ support interactive animation?
15
Layer between a node and its text
10
"Dynamic" picture in beamer presentation
9
Is it possible to associate part of a drawing to a pdfcomment (or similar) interactive bubble?
6
looking a way to create toggle region in PDF generated by pdflatex

3
How can I draw the following diagram on LaTeX using Tikz or some other package
1
How make multiple plot lines that have same state not overlap each other?
2
How to make a single annotation "Hidden Layers" instead of "Hidden Layer 1", "Hidden Layer 2", etc
1
Two hidden layers with different neoron numbers each layer in neural network diagram with tikz
2
Customize a layered block diagram
7
Modifying Spirograph code to get more control
1
How to make the arrow on y axis visible
1
How can I draw this diagram where gradients are drawn in xy-plane
3
How to make the nodes visible and make an infinite number of vertices graph?