I am trying to define a new shape in TikZ following the instructions of section 75.5 of the manual. Reading the question Drawing mechanical systems in LaTeX, I started to think that a "mechanical" library is really missing in TikZ, and it shouldn't, because it's useful just as libraries for circuits or diagrams. So I started in reproducing the symbol of a mechanical constraint:

(forget the vertical dashed line in the center) with the aim to recreate a set of symbols useful to draw mechanical systems and structures. That is what I've done:

Looking at the code of other libraries, this seems to be the right way to procede, but correct me if I'm wrong. As you can see from the resulting pdf, the two lower circles in the figures are misplaced a lot, and I don't understand why. The code used to draw the upper circle is taken from the definition of the ellipse in tikz. In addition, I don't know why, if I use an empty label in the node, the rectangle is missing. The last line of code (\draw[shape=carr....) is just an experiment. I would like to be able to write such a thing and see in the pdf just the reproduced shape, but I don't know if this is possible.

How to change the code to achieve the desider result? Do you think that this is just a waste of time? Suggestions on any direction are welcomed

Declaring shapes is one of the most useful features of the tikz/pgf library. It can be extended by endless choice and really is a good idea.

The problem with the shapes is the difficulties one has to go through to get it to work. This is due to the low-level coding that is necessary and essentially a good bookkeeping of variables is the problem. If one is not used to low-level variable reassignment this can become a cumbersome and even a task which cannot be completed without coding more than the basic layer offers.

This is also the problem of your code.

All this is fine, just keep it, you may realise that your east, west, etc. is not correctly placed. Thus you should add your own.

Thus if no text is present they are both 0pt. This tells you why it didn't show if no node text is supplied.

Your problem here is that \radius is actually a dimension. You do not save this value in any way. You need to use \radius as a regular dimension:
\pgf@x=\radius

This means that what ever you are saving to \pgf@yb you have no idea of what is (or actually it is \pgf@y from \centerpoint, but that is another matter).

same problem here. This will not work.

Here is another mistake. Let's go through what \pgf@process does.

This means that you can only call \pgf@process on a macro and not a dimension (as \radius is). The code you refer to have \radius defined as an anchor which is a macro. You could have done it on \centerpoint if \centerpoint were to change any other than \pgf@x and \pgf@y.

For further information on the purposes see the manual.

This final part is actually ok, however, it is cumbersome to read and one can easily make mistakes. I would partition it a bit more.

This solution has been made so that you can work more with it. There are many options that you need to fine-tune and post-process.

It is up to you to complete with the top circle etc.

Here is the end result:

Starting from the @zeroth answer, I've added some useful things, so I'm sharing what could be the "final result". I'll comment the differences:

Here I created a new dimension that is always an half of the last "saved dimension", in this case \radius (see Usage of a saved dimension in another saved dimension in a \pgfdeclareshape command. This simply because circles where too big (personal) and then I wanted to reduce their standard size. Maybe is better to copy the definition of the \radius before this code to avoid problems due to changes in the original code of the circle.

Because of the difference between \radius and \halfradius I had to redefine some anchors and the \anchorborder. In this whay when you want to draw a line from a node shaped carr, the line would start at the border of the upper circle. In addition I defined a new anchor at the baseline of the shape, useful to place the ground (see figure).

This is just the same

To delete the little part of the triangle in the upper circle I started to draw the path from the border of the circle. To do that I modified as I needed the values of \pgf@xa and \pgf@ya because using a different length (\pgf@xd, for example) gave an undefined control sequence error.

Here the radius of the small circles is set to \halfradius. In this way the presence of a label or a command like \huge changes coherently the dimension of the whole shape

It looks to me that when this is off, the label is better centered in the upper circle, but I could be wrong. 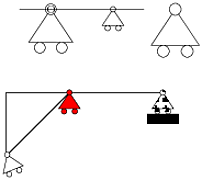 11
TikZ: Cropping the Bounding Box
14
How to draw an arrow in the middle of the line of a circle and how to position the arrow?
11
How to draw inside a TikZ node, using node style?
4
Size of circle path vs. circle node in \pgfdeclareshape?
6
TikZ/ERD: node (=Entity) label on the inside
15
TikZ: Drawing an arc from an intersection to an intersection
0
How to prevent pgf/tikz from drawing a circle as an ellipse when using relative coordinates?
3
Draw circle segments with TikZ
8
Drawing an arc between 2 nodes with a specific radius
6
Regular polygon VS circle shapes in TikZ