Multibib with TeXworks: how to parse second .aux file?

I need to use the multibib package to create a double bibliography document.

I am currently working with TeXworks 0.4.3 (on Windows 7), but I cannot make the double bibliographies system work.

TeXworks correctly produces the "sec.aux" file... But I don't know how to make it process this file! The multibib package says I should put a for cycle

I have tried to make the following test (Thesis is the name of the base tex file): 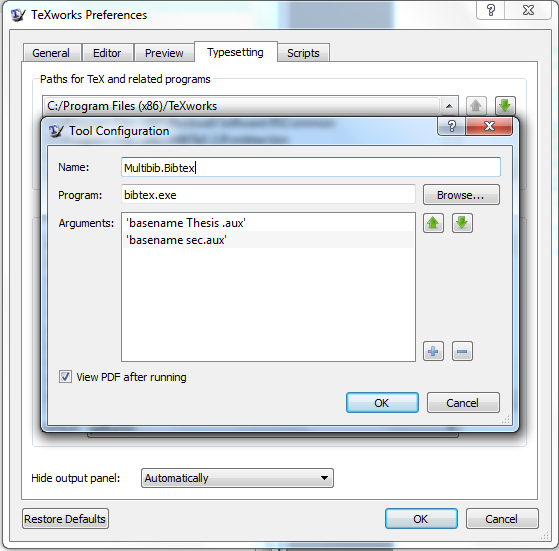 with no sensible results... any suggestion would be appreciated...

The script provided in the multibib documentation is Unix-based, so we will have troubles running it in Windows. In the script, there's also another command running inside single quotes - basename $file .aux - which returns the full path for $file (which is the current element in the for loop).

The solution is to manually run these commands in the following order:

As Mico suggested in the comments, you can also create a Windows-equivalent batch file. It's been a while since my last Windows batch file, but I'm almost sure we can use this one:

and then make TeXworks call myscript.bat with $directory as argument (note that $directory is a TeXworks variable which expands to the absolute path to the directory containing your root document).

Another suggestion (and sorry for tooting my own horn here) is to use arara to automate your document compilation. The header would be:

The secret here is the second line containing the bibtex directive. arara will run bibtex on mydoc (your document name), and also on sec.

Sorry for not providing screenshots and more info, I'm away from my Windows machine right now.

9
Publications not showing up using moderncv
3
Process multiple bibtex files
1
How to split bibliography into cited and non cited references?

5
Is it possible to use bibunits and multibib simultaneously?
6
Citation alias with multibib and natbib
4
multibib - hyperref doesn't work for my second bibliography
6
Multibib compiling multiple .aux files
4
How to use multibib in order to insert a second bibliography as a part of an annex?
3
TeXworks not writing .log or .aux files
1
Customizing references in Bibtopic
1
multibib custom prefixed number for second biblio