How can I improve my Turkish Small Capitals (XeTeX)

In a private email, Bogusław Jackowski (to whom my sincere thanks) has recognised this as a bug in the TeX Gyre fonts. As the TeX Gyre team are all working hard on another piece of the TeX Gyre project, he cannot commit to a date for fixing this, but his best estimate is sometime next year.

Here's my MWE to illustrate my annoyance:

and here's the output:

Now, can anyone, please, explain to me:

Further to EGreg's interesting comment, I 'made up' a new MWE, with an extra ı just to emphasize the problem:

Here's the output; the dot is still missing:

So now I'm getting irritated with myself, and I add another option:

which gives the same result.

Then I switched to Brill, with the same options, and got this:

which, of course, is not what I want, as EBİ is now all uppercase, not SC.

At which point I'm going to sleep on it. What's the correct behaviour for Letters=UppercaseSmallCaps?

This seems to be a bug in the implementation of the TRK feature in the TeX Gyre fonts. Here's an example:

and here's the result

The log file makes clear that the TRK feature is selected for both fonts:

Here's the relevant part of the interaction between polyglossia and fontspec (line numbers from polyglossia.sty):

Essentially, the Language=... option is passed to the defined font families (and fontspec creates a new one, as results from the log file reported above). The fact that Turkish is treated in a special way is a happy coincidence.

If you're not using polyglossia, then you should define a font family for Turkish anyway, or \textsc won't give the expected result on "i" when a non-Turkish language is involved.

The fontspec accent code looks a bit suspect to me.

if you drop back to the classic TeX accent command but using the dot accent from Unicode position things look a bit better. The alignment still seems slightly off for the full size I. 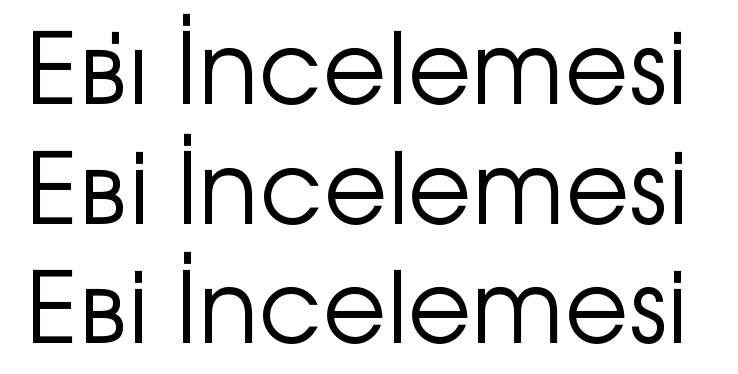 Not the answer you're looking for? Browse other questions tagged xetex small-caps or ask your own question.