(without the 2 a so called Young tabloid), ideally by writing

(using one character per cell, ideally allowing groups via brackets as in \ytabloidshort{89{10}{\ldots}{n+1},56}, but that is not important, the following is sufficient) or

of course with arbitrarily many rows and columns. The command/environment must (also or only) work in mathmode. That's why I included the 2 \cdot in the following examples.

I have found several ways to generate output similar to the desired, but they are all unacceptable.

What do you suggest?

Is it, for example, possible to parse the argument of \ytabloidshort and draw a matrix, each cell with content automatically with a line above and below. (But note the "problem in red"). How would one implement such a \newcommand? Any other ideas are also welcome.

I can split this problem into three questions:

Ryan extented his package ytableau to draw tabloids. As long as your are using the package, this solves all three questions. The picture above can be generated by

Sticking to the questions the status is the following.

I've expanded ytableau a little to include an option to draw tabloids.

Currently the new version is on my website and has also been uploaded to CTAN.

The ytableau package (by Ryan Reich) could be an option (examples take almost verbatim from the package documentation): 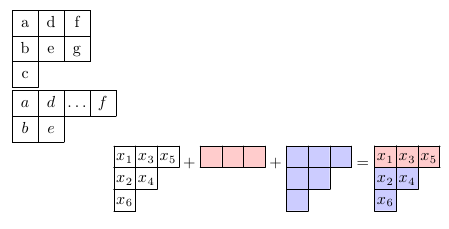 CTAN mentions two other packages associated to Young tabloids: youngtab and young, but ytableau is the most flexible and customizable one, as far as I could see.

If you don't like the rules, you can suppress them by saying

Here's an option. I'm not sure why you don't like the booktabs + matrix option, so you may not like this as well. However, it should give you an idea of how it can be implemented.

Edit 1: I removed a hardcoded value and added some of the booktabs constants into the function, you could fiddle with those to achieve spacing/weight that you like. 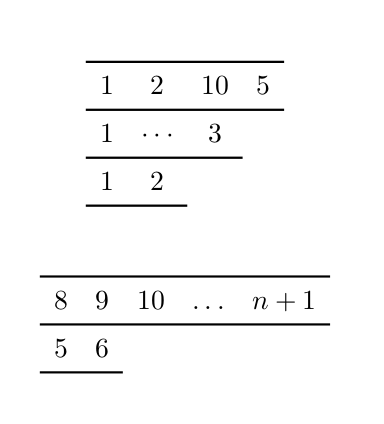 Edit 2: The case suggested in your comment should work now. This still requires the first row to be the longest however. 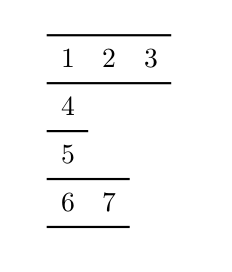 Edit 3: Removed hardcoded displayed math environment because, well, it was a bad idea.

This was actually an exercise for me to learn xstring and etoolbox functions a little bit better so the end result is not polished and there is no optimization of any sort. Also there is a space on the left side when used inline. I can't see why.

The syntax is simply a comma seperated list which should be terminated by an additional comma otherwise the last entry is omitted. 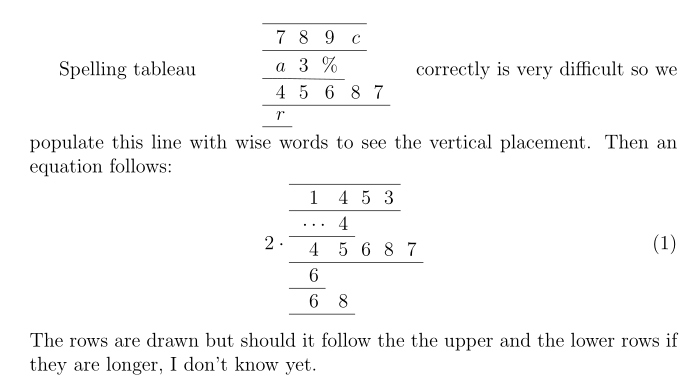 However, I think a pgfplotstable solution that is working inside a macro, should also be considered.

Not the answer you're looking for? Browse other questions tagged tikz-pgf tables matrices parsing ytableau or ask your own question.

5
Computing the rectangle encompassing a node and a point
6
custom hatching pattern : arbitrary direction of hatching
9
Line up nested tikz enviroments or how to get rid of them
2
Automatically find which nodes are closest, to aid drawing lines within a TikZ matrix
1
Drawing Young Tabloids in proper way
8
How can I draw angled lines in LaTeX to create ruled template for calligraphy?
3
Arrow between BTrees
0
Connect anchors of node within the node definition
2
Control placement of text in tabular environment