How to declare a mathematical operator whose glyph is the Greek letter sigma, when the unicode-math package is loaded?

A short description of the problem

I'd like to create a mathematical operator whose glyph is the Greek lowercase letter sigma, while the unicode-math package is loaded.

I saved the following LaTeX code in the file ~/Test.tex.

The code creates a mathematical operator called \op, whose glyph is the Greek lowercase letter sigma. The body of the document uses both the operator as well as the bare letter sigma.

I then executed the following commands in the Terminal.

This resulted in the creation of the file ~/Test.pdf. When opened in a PDF viewer, this file displayed as follows. (I screenshot only the relevant part of the display).

If now the two commented lines are uncommented, so as to load the unicode-math package and set the math font to STIX Two, and the code is recompiled, the resulting PDF file displays as follows.

As can be seen, nothing was printed out where the operator should be.

(The following remark is posted a day after the original question was posted, and after several answers have been proposed.)

However, the following code undermines these claims.

with classical font setup \mathrm has no effect on sigma so \mathrm{\sigma} is \sigma with no font change, so you could use

which will work with or without unicode-math

Operators are taken from the text font, so you need one that is suitable and has Greek letters. For example

(Without the glyph available, the log shows a warning: Missing character: There is no 𝜎 (U+1D70E) in font [lmroman10-regular]:+tlig ;! in the case of the code in the question.)

In 8-bit TeX fonts have very limited size, so Knuth came up with the concept of families, which in LaTeX are known as math groups.

The command \sigma is actually a mathcode, four hexadecimal digits that specify what math group the symbol should be taken from. Only mathcodes whose most significant digit is 7 allow the symbol to be taken from the current value of \mathgroup.

This is how \mathrm works: it sets \mathgroup to 0 instead of the default value −1, so mathcodes with 7 as leading digit will point to the desired slot in the font corresponding to mathgroup 0.

This is not a model for unicode-math, where basically there is a single math font, not several. And most characters have mathcode starting with 7, including \sigma, because unicode-math wants to change blocks rather than fonts.

Note also that \mathrm used by a command defined with \DeclareMathOperator switches to the main text font, which doesn't necessarily have a sigma in it (precisely, 𝜎 U+1D70E MATHEMATICAL ITALIC SMALL SIGMA). But it's easy to solve the issue.

We are essentially saying to LaTeX that \sigma should be taken from the math symbols font. 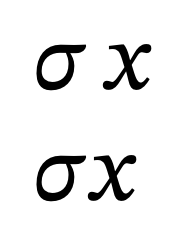 For reference, STIX Two Text italic has an italic small text sigma in it.

In the second line, \sigma will use the glyph U+1D70E (𝜎, Mathematical Italic Small Sigma) from the chosen math font (STIX Two Math).

However, as explained in the unicode-math manual (section 4.4, Legacy maths ‘alphabet’ commands), unicode-math makes \mathrm use the text font instead of the math font. If you don’t specify a text font (via \setmainfont), then Latin Modern Roman (LMR) will be used. But LMR doesn’t have the required glyph: during compilation, the following message appears.

I’d like to point out that changing \sigma to σ doesn’t help, since the character U+03C3 (σ, Greek Small Letter Sigma) is also missing from LMR.

We can fix this problem in several ways.

These solutions will look as follows (depending on whether σ will appear upright or italic).