How can I reproduce the bill of rights in LaTeX?

Though some might disagree, I think the Bill of Rights is a beautiful piece of typography.

I would like to reproduce this using TeX and friends, but have no idea where to start. How, for example, would I reproduce the beautiful g with the extra swash? Would I have to create the glyph myself, or are there such fonts available?

Also, is there a package that makes it possible to get the proper typesetting of "Article the first .... Text here"?

Attention: this is a failed attempt. Feel free to not upvote it. :)

Since you mentioned about reproducing the Bill of Rights, I thought it would be interesting to come up with a TeX example as close as possible as the original. But, oh boy, it was hard for me. And - spoiler alert - I failed miserably. On the other hand, I think it be worthy mentioning my method. :)

We are talking here about a calligraphical font. To get the beautiful g, we need to choose a font which provides this feature (see How is the effect (swash) achieved?). Once we have this font, we only need to use it. Engines like LuaTeX and XeTeX are great with dealing with system fonts.

Now, I really don't know any font which is similar to the title of the Bill of Rights. When everything fails, time to use some brute force. :)

My plan, initially: how about coming up with my own font? (see What is the most appropriate tool to develop a new font for LaTeX?) Looks like a crazy idea: I'm in! :)

First of all, I had to copy the countours of the title. To be honest, I was just looking for specific letters, so it wouldn't be necessary to map all glyphs to their "positions" in the font file. I lost half an hour to reach this: 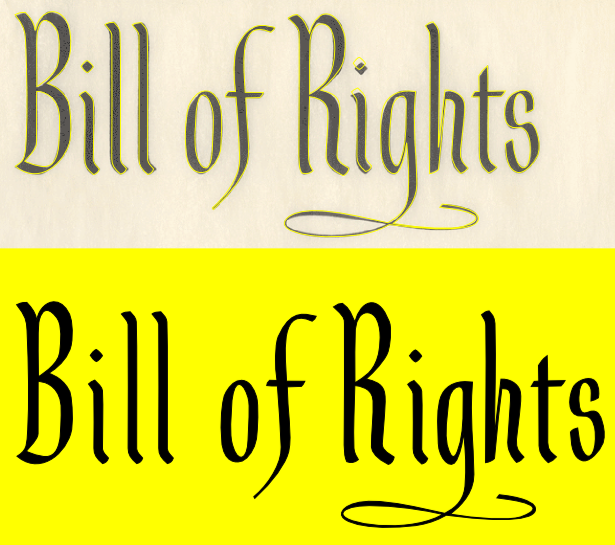 My soundtrack while tracing the title. :)

So far, so good. Now, time to travel to the unknown land of font creation. I opened FontForge and imported all the letters I extracted to their corresponding glyphs. The letters: B, i, l, o, f, R, g, h, t, s. 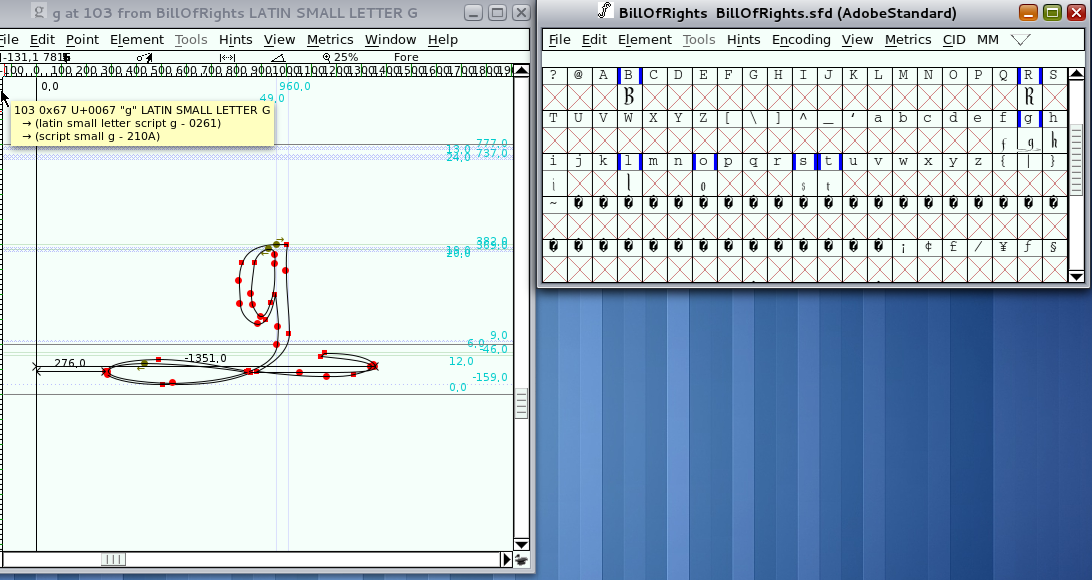 It was my first interaction with FontForge - quite traumatic, I'd say. :) I managed to import all the letters and fixed some errors. Creating your own font is hard! You need to adjust the kerning, scaling, etc. I was not ready for that hurricane of information. :) FontForge did its best to help me, though. Then I exported the file to an OpenType Font format - .otf. Let's see how my BillOfRights.otf looks like: 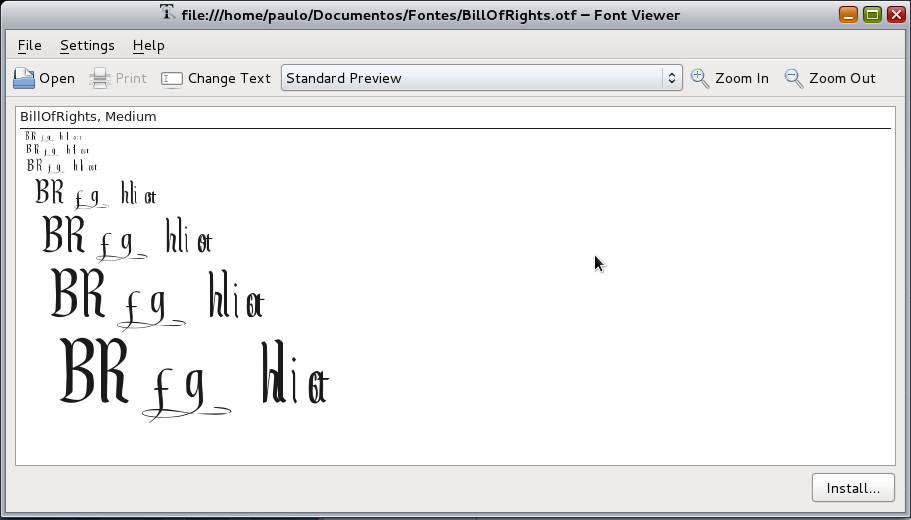 Yikes. I really failed with font settings. Surprisingly, I managed to get at least some letters into their correct display. :) Anyway, as a proof of concept, I tried a sample TeX file with LuaTeX, as provided by Khaled Hosny in luaotfload: how to use font in current directory?:

The Rights part didn't appear. Probably some error in the font. Nevertheless, I was closer than I thought. In any case, I decided to export my attempt to PSTricks. Here's the code (the SE framework doesn't allow entries with more than 30k characters, so I'm relying on GitHub), run it with XeLaTeX.

Moral of the story: It is possible to reproduce (very near to 1:1) the Bill of Rights, provided that we have time - and patience - to play with. :)

@Paulo Cereda's answer is really cool. I would like to propose a change in one of the steps. Doing the countours by hand can be very time consuming (Paulo took half an hour). @Werner gave a very good solution to automatize this task. I reproduced the title and it took me 30 secs. He proposes to use either potrace or autotrace. I found that potrace does a better job. They have precomplied distributions for several OSs. Here is the input image:

Go to the original answer for better details. Here is the output in PDF (It supports also SVG,EPS,PS, etc..):

You can either exploit the file to later import each letter to a glyph in FontForge or you can just input the PDF to your final document.

837
Showcase of beautiful typography done in TeX & friends
95
Adding a signature on an online job application
8
How is the effect (swash) achieved?
5
luaotfload: how to use font in current directory?
6
What is the most appropriate tool to develop a new font for LaTeX?