In Tikz, how to make the text on an edge have the same direction as the edge's?

I have created a simple node-edge graph in which I would like to have the texts on each edge aligned to the direction of the edge.

For example, I would like the text tbc rotates -90 degrees automatically to be aligned to the direction of the edge connects the node B to the node C. Is that possible?

The answer to the question of how to get the text to go along the path is to use the sloped key. This rotates the node to match the tangent of the path at the point at which the node would be placed (see Section 16.8 of the PGF Manual).

However, as noted in the comments, this doesn't quite work as desired. This is because of the auto key. This shifts the node off the path. It does so by placing one of the node anchors at the placement point, the anchor chosen appropriately for the tangent of the path (I haven't looked at the code so I'm guessing as to how it chooses it). The problem comes with the fact that the anchor is chosen first and then the node is rotated. What ought to happen is that the node is rotated and then the anchor is chosen. But actually, this doesn't need any complicated code since the anchor will always be one of north or south (if allow upside down is set then it will always be south). So simply setting anchor=south instead of auto will do.

Here's a simple example demonstrating the above analysis. The first three nodes are not sloped, the second three are. The first of the triples has no (other) options, the second is auto and the third is anchor=south. It's clear from the 2nd and 5th that the node has effectively been rotated around its anchor point. 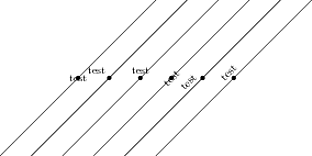 Here's your code with this change (plus a couple of minor stylistic changes: tikz loads pgf automatically, and \tikzstyle is depreciated).

And here's the result: 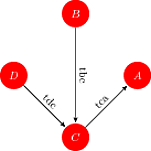 2
Tikz arrow's label automatically following arrow's angle
2
How to write under or over "arrows"?

15
Rotate a node but not its content: the case of the ellipse decoration
21
How to define the default vertical distance between nodes?
17
Numerical conditional within tikz keys?
7
TikZ/ERD: node (=Entity) label on the inside
12
Drawing rectilinear curves in Tikz, aka an Etch-a-Sketch drawing
9
Line up nested tikz enviroments or how to get rid of them
2
LaTeX Tikz: Compare two \def arguments
3
Arrow between BTrees
2
How do I change the radius of circle in a node in tikz style?
3
Document header with tikz