Is there any way to 'phantom' text within the align environment?

If you "hide" the tab alignment & from align, it will fail to work as expected. This is only because & is read as part of the argument to \phantom, which knowns nothing about & and its use. As such, you either have to spread the \phantom across the aligned components, or use an altogether different approach:

In the above example, some components were left untouched to indicate how some spacing correction is sometimes required when using \phantom (for example, when hiding the relation =).

The reason why \phantom around an entire cases structure works is because the tab alignment character is buried within the environment where it makes sense.

It's probably easier to use textcolor with white:

You need the color package.

This is an old question, but I thought that future searchers might appreciate this alternative, which in complex situation is much easier than splitting out the phantoms over the tab stops. It uses pgf, which has \pgfsys@begininvisible and \pgfsys@endinvisible for this purpose. 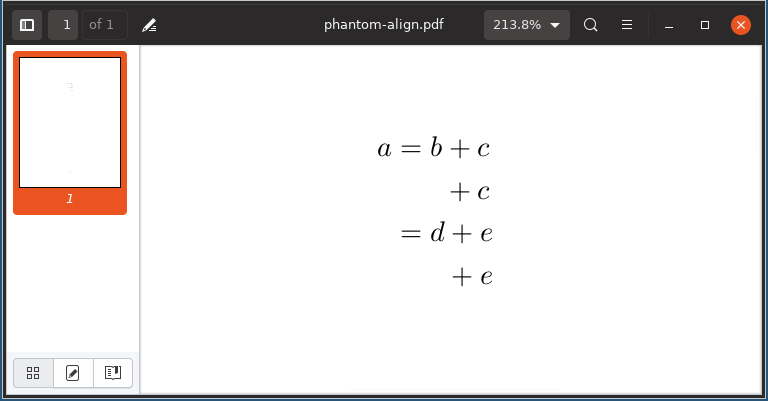 This is the mechanism that beamer's overlay system uses.

In fact, you can put this around the entire align* environment, which doesn't work with \phantom and is what the question asker originally wanted. Then one must be careful about introducing extra vertical space.

Not the answer you're looking for? Browse other questions tagged align or ask your own question.

9
Left aligning equations without align character
1
tikzexternalize and align environment - errors
2
Is there a way to put two labelled equations into one \begin{equation} and align both of them at the beginning?
0
Align a running list of expressions to the left
1
\resizebox within \begin{align}… \end{align} not working while using \intertext{
2
Align equations within one line
3
How do I reduce spacing between 2 segments of a line in a multiple alignment environment?