Due to time constraints I'm considering cheating a little and importing some tables I've created in Excel into my latex document. I realise I can do this quite nicely as a 'figure' using something like the following,

However, obviously this is now recognised as a figure... and appears in my list of figures rather than my list of tables.

Question, is there a way of doing this but for the PDF image imported to be recognised and labelled as a table?

Use table instead of figure. 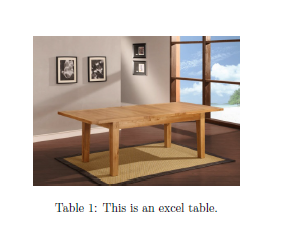 It's better to export the table as latex source than an image. By using the excel2latex tool, this is a very easy task.

To include the exported table you have to include the following packages to your main tex file: booktabs, multicol and multirow

If you don't want to use the booktabs package, you can uncheck the "Booktabs-style formatting" chechkbox in the export dialog. multicol and multirow are used as soon as you have merged cells in your excel sheet. If you don't see any \multicol or \multirowcommand in your exported table, you don't have to include these packages.

Not the answer you're looking for? Browse other questions tagged tables floats or ask your own question.

8
Table of images with captions
2
Where to place images and tables for a good layout?
5
Captions and labels for my tables, listings, images
5
Positioning of images/graphics in tables
1
How to keep tables closer?
2
Aligning Images and (Sub)tables in a Table
2
LaTeX mixing groups of images and tables
0
Place and align images in tables