Ways to grab and store larger amount of text

A standard way to grab and store a short text (say, a title of a document) is to use something like

But if the content to be stored is longer (say, an abstract}, I guess it is considered more elegant to specify it by something like

on the user side.

So, the question is: what techniques are available to do something like this? (Some that spring to my mind immediately are: use a \vbox, use delimited arguments, use the environ LaTeX package, use ConTeXt \grabbufferdata (if I am not mistaken as to the name of that macro)...)

The collect package; a little example (defining an environment to collect text and format it between rules and using \section): 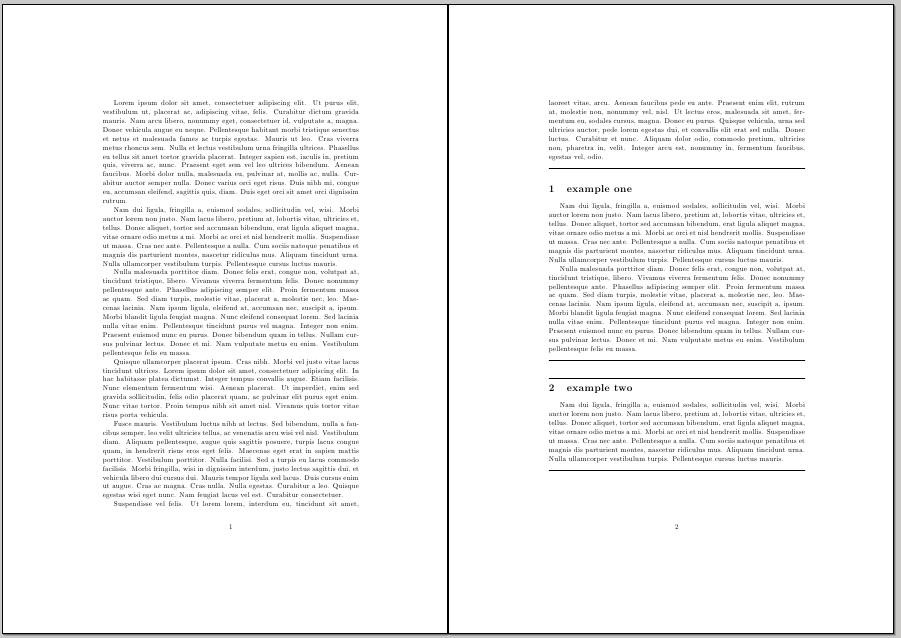 Extract the contents with

If you just want to store the text in form of tokens, like \title does, then you can do it with environ:

The environment's content is (locally) stored in the macro \BODY, so globally letting \@sabstract to it will do the same as \title does with \@title.

In ConTeXt, \grabbufferdata is a low-level command that is only useful to module writers. At user level, buffers should be used to grab and store contents. For example, store the contents using

and retreive them using:

You may also typeset the contents using

which is useful when you want to include verbatim material in tables and footnotes.

Buffers may be thought of as a clipboard for copy-pasting content; in fact, as named clipboard, which is useful when you want to repeat material in a document like a presentation or build metapost figures in steps. To get named buffers, simply store content using

and retrieve it using

Buffers are more robust than grabbing content using boxes because you do not need to care about catcodes while grabbing content. (Of course, you need to worry about them when retreiving content).

works fine even though the content has a #. For this reason, buffers are used when you want to process some XML inline in a regular TeX document.

Buffers can also be nested. For example:

(of course, buffer two is only available after buffer one has been retreived).

In MkIV, \startbuffer and \stopbuffer can be on the same line

Of course, like any other ConTeXt macro, you may define your own version of buffers.

and then use them as regular buffers.

The before and after keys are used with \getgrabcontent.

Since buffers don't care about their content, they are an excellent comment environment. In fact, the hiding environment in ConTeXt is defined as a buffer.

The scontents package tries to imitate the concept of ConText buffers from the LaTeX side.

Wheee another one for the #-rule:

2
Macro: Storage and usage of abstract content does not work in cls

8
Writing the chapter and the heading in two different ways
4
How to store and append text for later use (inside enumerate environment)
2
Store text command containing itemize in a variable
6
How to write macro with variable amount of text variables
4
Store values, text, commands in variables
6
How to store and restore the current font size?
8
Using control sequence names to efficiently store a large amount of characters
5
How to robustly store bits of text for later use
2
What `\cs_new_protected` and `\cs_generate_variant` do?
3
Why does a subscript grab the argument of `\text` but not of `\operatorname`?