I'm trying to get a description's list hanging indent to lie flush with the first line of text. I have a description list such as the following: 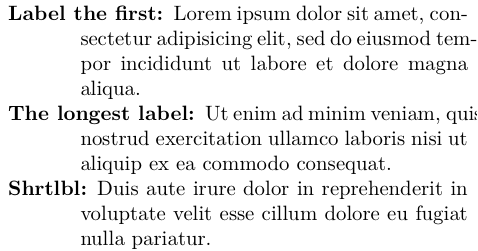 I would like to have each paragraph indented so that the following lines are flush with the first letter of the list item's text, the way it's laid out in my TeX. For instance, the "s" of "sectetur" should be right under the "L" of "Lorem". I've tried looking through the documentation of the enumitem package, but I can't seem to find a good option. I tried specifying [leftmargin=3cm, style=sameline], but this results in the following: 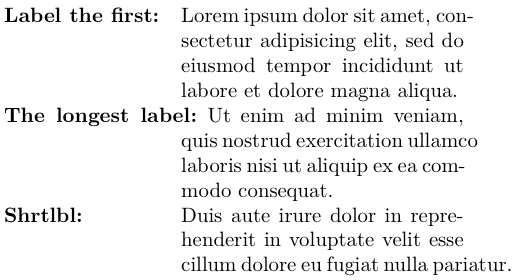 This isn't quite right: I'm trying to get each item lined up differently, so that the "L" of "Lorem" is not necessarily flush with the "U" of "Ut" or the "D" of "Duis". Does anybody know a good way to do this?

Here's a solution which allows you to just write

It works with arbitrary text inside the {DESCRIPTION} and can be nested with other lists.

The code work by resetting the relevant list settings at each \item instead of just at the start of the list.

A Plain version which may or may not help: 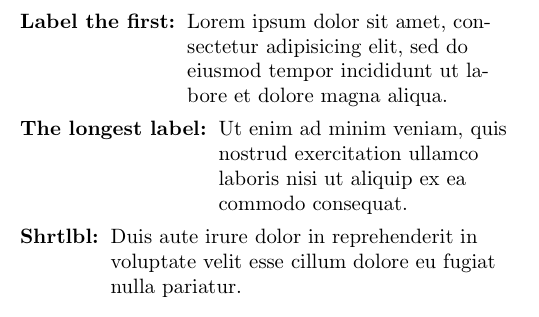 The solution below is copied directly from page 850 of The LaTeX Companion (Second Edition). This will not give you exactly what you want; it aligns each item to the same margin but it's something to work with:

The default indentation for each item is \quad. By passing the widest entry of your list as an optional argument after \begin{altDescription}, for instance, \begin{altDescription}[The longest label], you can line up all your items with headings aligned right. Moving \hfil from its current position to right after \textsf{##1} will align your headings left.

Nevertheless, the authors (Mittelbach, Goosens, et al, p.149) argue that the above is not the typographically acceptable solution because it could be awkward to have varying list indentations for several lists. Thus, if you want to align the items to a fixed width, you can adjust \labelwidth and \leftmargin accordingly by adding extra lengths, for instance \setlength\leftmargin{\labelwidth+\labelsep + 2em}}} and then passing [Return values] as your optional argument after \begin{altDescription}.

However, if you still want a solution that aligns each item to the width of the heading, you will probably want a \hangindent fix but I've played around with that and I could not figure out. Another alternative is to tinker with the example I've given. There must be some way to pass the optional width argument as a variable that is determined by the width of each heading but that is beyond my knowledge for now.

This is somewhat old, but I had the same problem. Here's the solution I came up with:

Have you tried just using the tabular environment? Just enter each [description] as the first column, and each paragraph field in the second column.

Not the answer you're looking for? Browse other questions tagged lists indentation description or ask your own question.

3
Correct indenting in a description environment
11
How to control enumitem's description list via leftmargin and labelwidth keys
5
Nested list within `defbibenvironment`
3
How to align continued/spilled line to part of the sentence
3
Indent as much as the width of a word
1
Hanging indent for text
1
Itemize with not so small items (vs. Description with unaligned text)
0
Set text on one vertical line
0
How can I define a new environment and passing in different conditions for items?
1
Change description environment indents
See more linked questions