How to find out if a math list consists of a single character?

When accents are placed, the TeX engine gives single characters a special treatment; see the TeXbook, Rule 12 on page 443. See also this question and its accepted answer for details. Thus, for fake accents like those provided by the accents package, it would be useful to find out whether a given math list consists of a single character. Examples of single characters: a, \alpha, \mathcal{A}. In contrast, ab, a{} and a\hspace{0pt} are not single characters.

Thus my question: How do I find out if a given math list consist of a single character?

Part of the special treatment of single characters in accent placement is the handling of sub- and superscripts. From the TeXbook, p. 443, Rule 12: 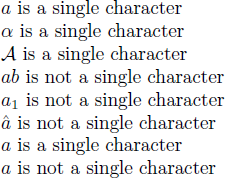 Not the answer you're looking for? Browse other questions tagged math-mode tex-core or ask your own question.

25
Why does \widehat behave differently if I insert \hspace{0pt}?
29
What exactly is a “single character” or “symbol” in math mode?
5
How to customize a newcommand?
14
Can one determine the first character of a given math list?

34
How to find out where a macro is defined?
29
What exactly is a “single character” or “symbol” in math mode?
14
Can one determine the first character of a given math list?
8
\setbox containing maths interferes with surrounding math mode in XeTeX
15
\hat and \widehat look terrible: fixing width and better positioning?
7
Macro with environmental dependent output
17
Using unicode “combining right arrow above” to generate vector command
8
Why in the discussion of the definition of \newif are the following things true
9
Appending active and expansion sensitive characters to a macro
16
Why doesn't a trailing tab typeset?