creating a fifo symbol with pgfdeclareshape

I'm trying to create two new shapes for use with the PGF/TikZ environment for my final thesis in embedded engineering. The purpose with the symbols are a task diagram, which is kinda like a UML diagram. The first symbol, which I think could be a template for the second is a simple FIFO queue symbol.

These are figures from a previous course in embedded programming I've taken. So I'm free to create my own ones. But these seem to be the standard at my school, so I would like to not deviate too much.

I've figured out by reading this answer ( What is the easiest way to draw 3D cube with TikZ? and thank you Matthew Leingang for that answer) that I could copy the rectangle shape and remove the west and east sides, like this:

That give me this:

I could live with that, having the text in the center also opens for a lot more connection points for arrows to other nodes. But I still need to have a FIFO with a semaphore symbol and semaphore name. For the life of me, I can't crack that one. I'm thinking that I should do a multipart node so I'd have a field for both the queue name and the semaphore name.

I tried to create the internal vertical lines, but only got as far as the first one, then the next ones crashed the compilation. I went about it by first defining the offset between them:

Between the first \pgfkeys and \pgfdeclareshape and then I defined new x axis values for the vertical lines with:

and added the path:

this gave me this:

NICE! right?!? But then I want to define some more vertical lines, so I add this right after I have declared \pgf@xc:

I'm thinking that this should shift the x value left by internal_displacement x, but instead I get a whole lot of errors along the likes of:

I'm guessing internal_displacement x is cleared after being read the first time? This seems rather counter productive. There must be another way of doing this.

So is there somebody who has an idea of:

You can also place your node with a pattern fill and decorate it if the shape declaration turns out to be difficult. 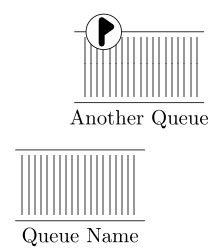 Here's something to get you started. First, the basic points:

Here's some code that does that, as well as shifting the drawing to above the text.

Not the answer you're looking for? Browse other questions tagged tikz-pgf nodes pgfkeys pgf-core or ask your own question.

77
What is the easiest way to draw a 3D cube with TikZ?
25
How to modify nodes in TikZ to automatically add a line on their top?
3
How create a customized node style?