I'm trying to import this latex document into Lyx (version 2.0.2 on Ubuntu 12.04), but it fails and won't give any explanation about the error:

What could be the problem here?

Importing the downloaded file into a non-UTF8 editor (like TeXnicCenter 1.0), reveals:

The first character could be the cause of the problem - called a Byte Order Mark. Even importing this into LyX 2.0.4 adds the following into the preamble (Document > Settings > LaTeX Preamble): 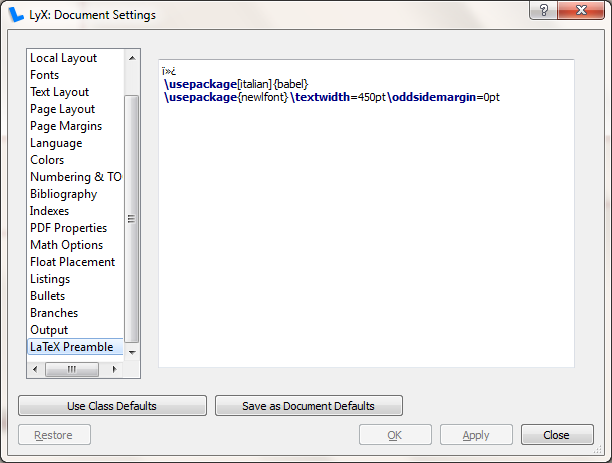 which you'll have to remove. Either remove this from the file first before importing, or attempt an update of your version from 2.0.2 to 2.0.4 and remove it after importing.

I did the importation when I open the tex file with Kile, after that opening it with TexnicCenter and finally the Lyx (2.1) in Windows.

If you change the document class from svjour3 to revtex and the converter works well! If you still need to work in a svjour3 or report class, reconstruct an empty LyX file from the template and copy all things you obtained from the revtex class and this may solve the problem.

Not the answer you're looking for? Browse other questions tagged lyx import covers or ask your own question.

2
Runtime error while importing a poster from .tex to .lyx
0
cannot import tex file into LyX

1
ClassicThesis, Lyx and PDFLatex: Font fvmro8r at 558 not found
2
How do I import a text file into Lyx keeping its formatting?
5
LyX + SyncTeX + Document Viewer Evince
0
How do I import latex files into LyX?
1
LyX: Import LaTeX from Clipboard
1
LyX can't import UTF8 properly