Their results seem to be similar. 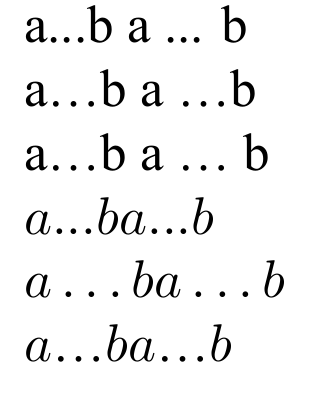 Remark -- The answer given below addressed the original version of the posting, which asked if there's an advantage to using \ldots over ... (three consecutive dots). At some later stage (May 2013?), the posting was changed to ask a different question, viz., what the best method is for inserting a text ellipsis in a (Xe)TeX document. The OP also provided a new answer at the time.

Is there any advantage in using \ldots instead of ...?

Yes! If you type ... you'll get some rather-closely spaced dots. In contrast, with \ldots the dots are correctly spaced for a typographic ellipsis.

The following MWE illustrates some of the visual differences created by ... and \ldots. The differences are readily apparent in both text mode and math mode.

Naturally, if your language is not English -- for which \ldots was designed initially -- you'll want to make sure that the ellipis created by \ldots conforms to your language's typographic conventions. @egreg's comment suggests that this may well be a concern for the French case. For such situations, you may want to use the commands provided by a specialized package such as ellipsis or csquotes rather than the "standard" \ldots command.

Addendum prompted by a follow-up question by @moose: In LaTeX, there's also the command \dots. This raises the natural question, what is the difference between \ldots and \dots? The simple answer is: There's no difference in LaTeX. (I'm not sure if this applies to Plain TeX as well; I don't have the TeXbook at hand today...) The definitions of these two commands (from latex.ltx) are as follows:

The \textellipsis instruction, in turn, is defined in the LaTeX kernel as follows:

I suggest using \ldots in combination with the package ellipsis, because that gives you better control over spacing than .... Using \ldots alone (without ellipsis) is better than ... because it gives you more flexibility. For example, you may redefine the spacing by redefining \ldots. On the other hand, ellipsis makes it easy to fine tune spacing, and takes care of other spacing problems, for example to combine ellipsis with full stop (....).

If you want to fine tune ellipsis, you easily change the distance between the dots by the command:

By adding the option [xspace], i.e.

terminating the \ldots-command by \ is not necessary (but even xspace makes errors, as documented in the manual). If you use ellipsis, remember to load it after hyperref.

The package csquotes has the commands

that fill similar functions as ellipsis and give you the tools for automatically handle exception from the rules. Therefore, they are better solutions than ....

I recommend using \ldots with ellipsis (or substitutes), which give best control over spacing, more flexibility and typographical consistency in more situations.

If you have installed AutoHotKey use following script to convert ... to … automatically:

In MacOS, it can be inserted with ⌥ Opt+; (on an English language keyboard).

In Linux, it can be inserted with AltGr+.

173
Consistent typography
144
\dots versus \ldots - is there a difference?
16
Ellipsis with a period/fullstop
3
Biblatex - Multiple authors - 'and' should become '&' + DOT between title and publisher
3
Is renaming \dots as \ellipsis or \etc semantic overkill?
0
Best symbol to use for ... in the case of 1,...,n
0
How to properly space unicode ellipsis?

150
What is the best way to use quotation mark glyphs?
23
Putting quotation marks in TeX document
47
How to properly typeset all forms of punctuation used in English-language documents?
12
What are the TeX definitions for the hyphen and dashes -, --, and ---?