I need to make a smart vector command that meets the following criteria:

So I think it comes down to parsing the comma separated list and doing some logic, but I must confess to not understanding that part of my MWE, which was offered to me here in another thread. I don't want to be guilty of cargo cult programming any more than I already am.

If I understand correctly, the following should work: 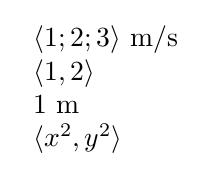 A shorter LaTeX3 version that uses a recent addition (\seq_use:Nnnn); I also use siunitx for the units.