I've made the command

to highlight in pink. It works fine for words and sentences, but if I want to highlight a subpart of a word, e.g.

Is there any way to override this?

First of all, TeX language is not "free form", so there's a big difference between

In the first case two spaces are added before and after the \colorbox, because end-of-lines are converted into spaces and they become part of the replacement text. So your first attempt is equivalent to do

and the source of the spacing is now evident.

However, there's also another catch: \colorbox adds a padding around the text; its thickness is controlled by the parameter \fboxsep.

Here is a more complex definition for taking into account a problem that will be clear from the last example: 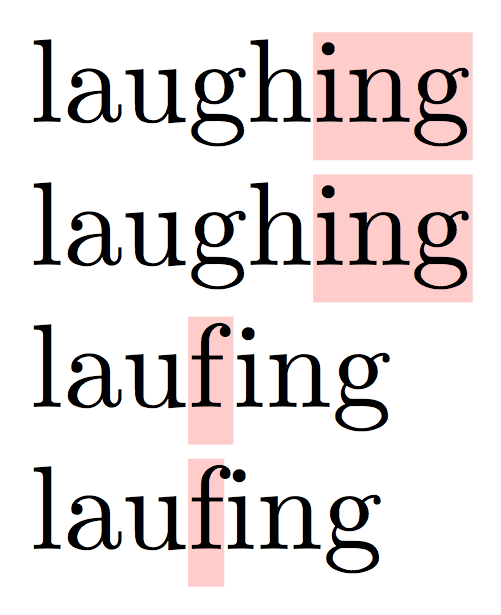 Okay, I've answered my own question. In the original code I'd used some new lines to make the macro more readable;

I didn't realise these would affect the final formatting.

removes the gap before the colorbox. However, there is still some extra space within the colorbox before the first letter, which I'd quite like to trim.

Not the answer you're looking for? Browse other questions tagged spacing color boxes or ask your own question.

3
Remove space at the end of a macro
12
Implementing a sort of “tightened frenchspacing”
22
Remove spacing above section in titlesec
5
Remove space before \reftextfaraway
10
Too much vertical space before \part when using \marginpar
5
New command adding extra space
4
`\color` inserts unwanted vertical space in `itemize`
3
Space added at end of each item parsed from comma-delimited list: how to avoid this?
0
new commands, spacing and italic fonts
1
Reduce space between equations and text