When to use which package for strikeout?

In what situations is it best to use which one?

Maybe there are other packages I am not aware of?

Shouldn't be there one standard way to strikeout?

cancel is intended for indicating mathematic cancellation, and consequently only works in math mode; it also strikes out diagnoally.

soul and ulem seem pretty similar. One basic semantic difference between them is that ulem per default changes the definition of \emph{...} to underline its argument instead of putting it in italics. This seems to aim at the reproduction of typewriter typesetting, when underlining often was the only means of indicating emphasis. Since using underlining for emphasis is mostly deprecated nowadays, I've always used soul when I did need to underline something.

The one big reason in favor of soul, however, is that it's able to deal with line breaks and hyphenation:

(The X are necessary because LaTeX won't hyphenate the first word in a paragraph.) 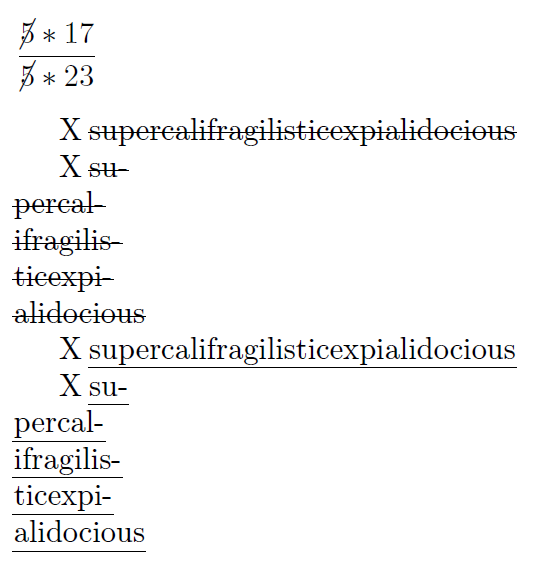 Not the answer you're looking for? Browse other questions tagged packages text-decorations soul strikeout ulem or ask your own question.

17
List of Underlining Packages - Pros and Cons
5
Alternative to the soul package?
0
macros - multiple dotted lines with answer on the lines
1
highlighting strikeout text with ulem shifts the line downwards