Align an equation and a tikz picture with anchor and baseline

I'm trying to get the math part the equation to be centered with the tikz picture:

But instead it places it on an even baseline: 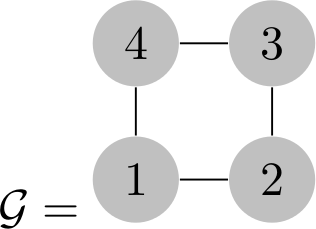 My attempts at the tikz portion come from the related questions:

Common baseline in TikZ and Mathmode

How to align a series of TikZ pictures at the baseline

I think I'm misunderstanding the syntax between \tikz \node, \tikzpicture and \tikzstyle. What do I change to align the tikz picture without adjusting the raw coordinates?

You need to use baseline on the tikzpicture, not on the nodes. As Tom Bombadil mentioned in the comments you can use current bounding box.center to put the center of the TikZ picture on the baseline. I would also add an yshift to center it around the middle of the = sign. -.5ex seems to do it.

There are a couple of things wrong with your setup.

For a reference about styles and their scoping you can see one of my previous answers: Scopes of styles

Ok, so a quick fix for your solution would be to do the following:

i.e. an alignment against the circle containing 1.

However, if you wish to align against the center of the structure you should specify the baseline shift for the tikzpicture. That is baseline=<length>.
In your case the middle of the figure can be calculated using the calc library. Here you need to realize two things:

This means that you need to calculate the shift according to the height of the line (i.e. include the text height in the shift).

This can be done easily by using this style:

Not the answer you're looking for? Browse other questions tagged tikz-pgf positioning baseline or ask your own question.

1
Positioning of text before a graph in TIKZ
53
Global variables for all tikz drawings in a document
25
How to align a series of TikZ pictures at the baseline
24
Common baseline in TikZ and Mathmode
6
Position both math environment and tikz picture in the tabular
6
Sizing parentheses around tikzpicture
5
How can I draw the following formula in Latex?
3
Equations using Tree Diagrams
2
Vertical dotted column in matrix
0
vertical centering in longtable
See more linked questions

25
How to align a series of TikZ pictures at the baseline
20
How to define the default vertical distance between nodes?
16
Numerical conditional within tikz keys?
3
Referencing parts of equations within a tikz picture
17
TikZ: Drawing an arc from an intersection to an intersection
9
Line up nested tikz enviroments or how to get rid of them
3
Arrow between BTrees
1
How do I change the radius of circle in a node in tikz style?
3
Document header with tikz