adaptively sized/positioned arrow symbol pointing to the next line

I would like to use a curved arrow symbol, positioned downwards, to signify "continued on the next line". I'm adjusting the arrow's size using scalefnt and taking the symbol indirectly from mnsymbol in order to avoid package conflicts.

I normally use this symbol to signify "math formula continued on the next line", but this example uses text since this is sufficient to illustrate the issue:

While the symbol scales in a small context, the combination of placement / size / distance to the next line appears incongruent: it is much closer to the letters "x" in the normal-sized context. Why is that, and how does one correct this? Inter-line spacing might play a role here, btw.

(Addendum / minor remark: Just now I realize that the arrow probably shouldn't be visually that close to the "x" letters ... anyways, my question still stands in the exact same way, as it's the consistency that I'm asking about; what I just noticed can so easily be adjusted through the right combination of the \scalefont and \raisebox factors, which I won't change in this post, to avoid confusion.)

The reason behind the strange behaviour is that you are not ending the paragraphs inside the groups that are affected by the font size switches, so the \baselineskip applied is the same as in \normalsize and this produces the inconsistency mentioned; as soon as you end the paragraphs inside the groups, the proper value for \baselineskip is applied and the problem disappears:

By the way, the font size switches are commands with no arguments, to be used as, for example, {\small some text\par} (the braces are to keep the change local and \par just in case more than one line is used and the proper value for \baselineskip is applied). 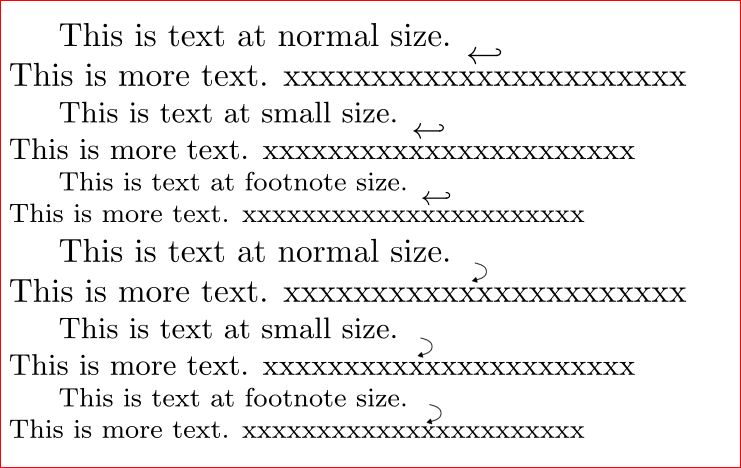 You can also use the usual overkill option of tikz which then gives you all the flexibility inherent in tikz in terms of adjusting the arrow tips, colors, line styles, etc. A few of the options are illustrated below: 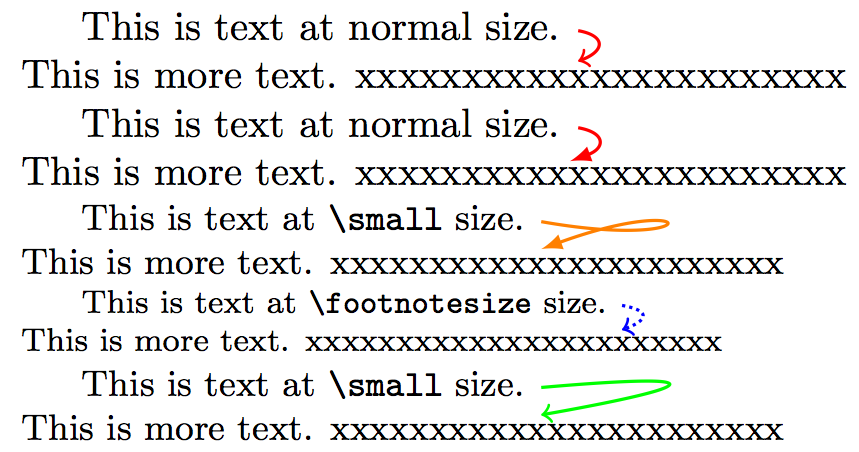 Not the answer you're looking for? Browse other questions tagged symbols positioning line-spacing or ask your own question.

11
Relation symbol used by Conway in On Numbers and Games
7
Change line spacing for footnote text only
3
How to make a box with a height based on multiples of the current line height
15
How to define the default vertical distance between nodes?
2
ConTeXt: How to increase line-spacing in title?
13
Is there a short diagonal pointing arrow symbol?
4
Create a Circled Lowercase Omega
4
Uniform line spacing in columns
3
Consistent custom equality and subset symbols
4
Odd (nasty) problem with relsize for quotes and linespread in preceding paragraph