For what it's worth, Knuth says that they should be added in Mathematical Writing.

Don’t overdo the use of colons. While the colon in ‘Deﬁne it as follows:’ is ﬁne, the one in ‘We have: ⟨formula⟩’ should be omitted since the formula just completes the sentence. Some papers had more colons than periods.

That said, in the TeXbook, he omits the periods in some of his displays, but usually when he's showing TeX input and output. Compare the display on page 127

to the displays on page 128 (which I won't duplicate since that previous one was enough of a pain).

Some remarks about punctuation within displayed math from the practice of professional typesetting :

Displayed equation usually are considered to be part of the preceding sentence, that is it will get the very same punctuation as if it was inline math: if the sentence ends in a displayed equation it gets a period, if a where … is … or something like that follows, the equation is ended by a ,, and so on.

For LaTeX-code, this means that there is never a blank line before any displayed math environment, unless you want to start a paragraph with a displayed equation for some reason. Accordingly, after the \end{} there is only a blank line if the whole preceding paragraph ends with that very equation.

The following screenshot covers some of the most frequent cases for spacing and punctuation within displayed math and how a typesetter would typeset them properly for most publisher's desires. This is how a professional typesetter would submit a document to the average publisher without causing reason for refund: 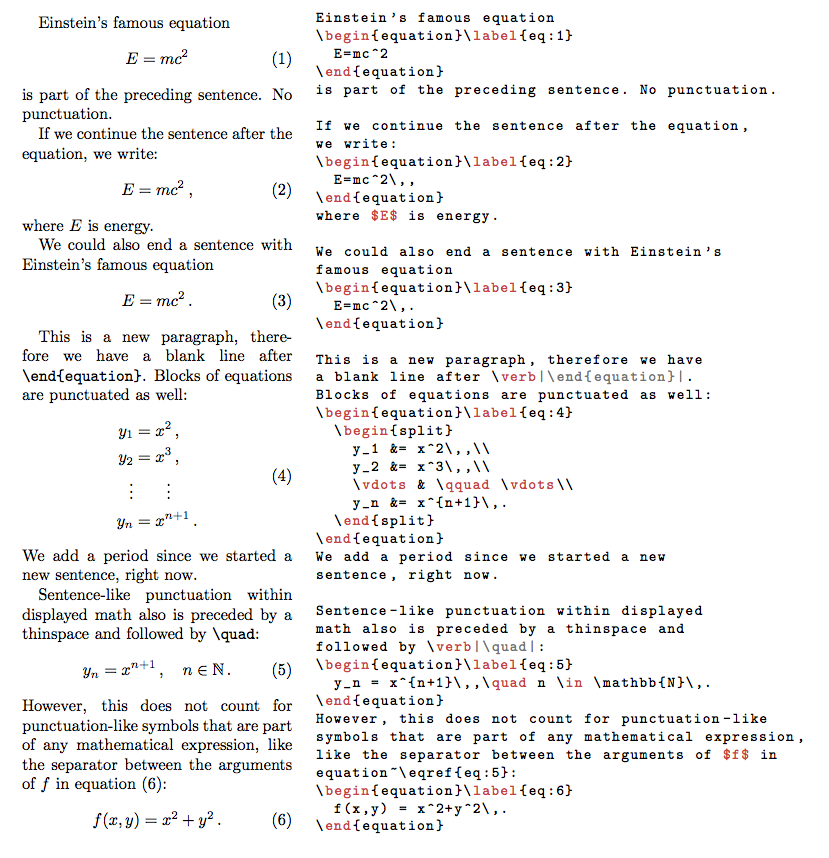 Some final words: After all it is a question of taste and concept whether or not displayed equations are part of the surrounding text and whether or not additional spacing is used to distinct math punctuation from text punctuation. When in doubt, imagine to substitute the equation(s) by a single symbol x and figure out how you would add punctuation and ask your publisher about proper spacing.

This has been discussed at great length over at mathoverflow. My personal opinion (which agrees with the two most upvoted answers over there) is that you should always use proper punctuation. (In the example of frabjous, where the period "." has a mathematical meaning, I would make an exception.) I think that if you look at books, you'll mostly find everything with punctuation (of course not in the case when I say that

holds for all real numbers a and b).

However; I think that Andy is right, there's no real consensus, and it seems to depend on the community if punctuation is desired or not.

I don't think there is any consensus on the matter. I've gotten into heated debates with co-authors on the matter, and I always fight to include the correct punctuation.

When you publish your paper, the journal will force you to conform to their style guide anyway, so it's not something you have complete control over (but it might be worth noting that many journals [eg, I believe, the Annals] believe in using correct punctuation on math displays).

Personally I think it looks very ugly to have punctuation there. It can also be confusing. Not long ago people used dots on the baseline for multiplication, and the Peanist school of logicians used dots in place of parentheses for grouping, and these could be misconstrued as that.

But take that with a grain of salt. I think you'll find that this this is something people disagree about. I've definitely had publishers of my work try to force this kind of punctuation on me, and I've always insisted that it be removed. Sometimes they do what I ask, and sometimes not, and I definitely have seen both practices in stuff that I read.

My personal view is that mathematical documents (as well as other structured documents) should have a linearized version that complies with a well-accepted and consistent set of punctuation rules. While using some symbols like the period may cause ‘interference’ with a display equation, it seldom seems to bring any real barrier for comprehension. (And if it does, you can always rearrange your sentence.)

1
Ending sentences in an aligned equation
9
Comma after equation
18
Vertical position of punctuation following fractions in display-style equations
10
Punctuation in equations
6
"$$...$$." has the dot on the wrong line; How to punctuate correctly?
5
Should a code sample be followed by a punctuation to conform to the language grammar?
2
Should a list of equations displayed vertically have conjunction?

43
Which command should I use for displayed equations?
37
Period after math-mode equation
7
error in mathematical expression
5
Is there a formal grammar for *Equations* in TeX/LaTeX?
1
Line break character in equation code
1
formulas on the left
0
Getting wrong math formula with CTEX？
4
Should I put comma between two successive equations?