Neither of \sfseries nor \sfshape seem to work. So what is the command I'm looking for to change the current group to sans serif? \bfseries, \scshape and \itshape work, but I can't find the sans serif command to do the same thing...

The command you want is \sffamily. I don't know why bold is a series (other font weights are too; it's probably a typographical term), but it should be clear why small caps and italics are shapes; sans-serif fonts are a family of fonts, hence the name. (While I understand the logic, it does feel like consistency would be nice….) There's a list in a TeX FAQ answer:

Although this question is quite old (only found it because lockstep reactivated it) it’s maybe worth to add this information.

For my lectures on LaTeX I use the following image to explain the way LaTeX categorizes the different characteristics of printed material. 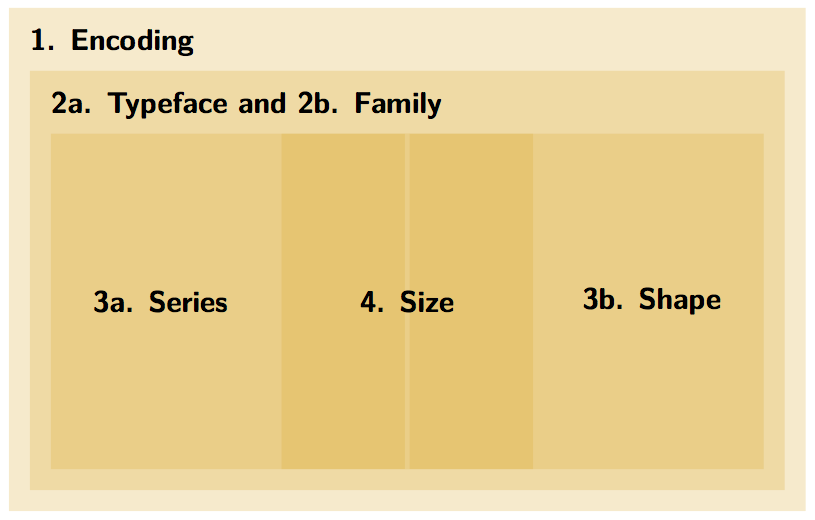 The first thing to select is how the font is encoded in it’s file(s), that means which character is on which position. The font encoding (in pdflatex) is usually set with the fontenc package using something like

This has nothing to do with the appearance of single letters.

2a. Typeface and 2b. Family

Here LaTeX doens’t differentiate too much. The Typeface (2a) is the “font” like Computer Modern Roman, Times New Roman or Helvetica, for instance. The typeface is usually (in pdflatex) selected by loading a package like

to load the Latin Modern fonts (a list of many font packages can be found in The LaTeX Font Catalouge). And here the problem starts: lmodern will not only load a single typeface but three typefaces for the three families (2b) Roman/Serif, Sans Serif and Typewriter. To select a family (2b) you can use the following three font switches

On the next level you can select a series (3a, also known as weight) and/or a shape (3b). The different series share the same characteristics but differ in the stroke width. Normally LaTeX uses only two series but there are typefaces with up to ten or more different weights.

for the sans serif family.

In general you can combine the series with any shapes, but not all typefaces contain all possible combinations, for example bold italic small caps are extremely rarely to find. It is possible to combine several shapes too but not two different series. In LaTeX you can select out of the following ones

Please note that italic and slanted are not the same in any case. Especially serif families normally (hopefully) have a real italic shape that even has different letter forms, e.g. the letter a. Sans serif families often level this difference as you can see in the following image.

I won’t show any theoretically possible combination since the Latin Modern typefaces don’t support all of them, as you can see the sans serif not even has a small caps shape. In this regard I’d like to highly recommend you not to fake small caps by using scaled uppercase letters. When you scale the uppercase letters you will also scale the stroke width and then the faked small caps won’t match with the upper case letters.

The obvious part of this level is the width and height of the letters, which can be selected with the switches

These font sizes are relative and depend on the selected value for the regular text, which is done with a class option like 11pt, for instance. If you want to set a certain size, you can use \fontsize{<size>}{<baselineskip>}\selectfont.

Beside this obvious sizes there is a thing called optical size which means that the letter forms for tiny sizes are quite different from the ones of a huge size.

The last line shows a text set with \Huge, the first line was set with \tiny and the mid one with \normalsize, all scaled to have the same letter height. As you can see the letters designt to be set in a smaller size are much more robust in the stroke width, their spacing is increased and the letter forms are much wider. That was done by the type designer to keep small text readable and prevent the thin stroke from breaking when printed.

Fortunately LaTeX is smart enough to find the right optical size for the current size of the letters — unfortunately only few typefaces come with different optical sizes.

As you can see above, some characteristics can be changed by two macros, like \bfseries and \textbf, some — the size macros – got only one, like \large. I call the ons with an argument text commands because they can be used within the running text (inline) and can be used to change the appearance of a single or few words. The ones without an argument I call font switches because they switch a characteristic on or of, and their effect can only be limited by a group. The font size switches don’t have a accompanying text command because it won’t make much sense to change the font size inline (except footnote marks maybe, but this is done automatically if necessary)! Please keep in mind that there are no environments to change the font, specilly there are no such environments as \begin{large} ... \end{large}!

See Will two-letter font style commands (\bf , \it , …) ever be resurrected in LaTeX?.

code to generate the first image of this post:

Not the answer you're looking for? Browse other questions tagged formatting sans-serif or ask your own question.

53
Tabular, make a column or a row emphasized
30
What is the origin of the family/series/shape distinction?
38
Why Different Commands for Seemingly Similar Tasks?
15
Combining sffamily and scshape
13
Synonyms for \bfseries and \itshape and such?
7
Is there a modal command for MakeLowercase?
5
Why do some font commands behave differently?
2
What is the fastest way to make following table in tex?
3
Column format in longtable
2
Bibliography changes style after entry 15
See more linked questions

2
Force font to computer modern (serif) in math mode although it is set to sans serif
8
\textbf and \bf within Sans Serif
5
Does boldface sans-serif not work?
19
How to write bold, italic and sans-serif at the same time?
2
Change tracking for sans serif font
4
Myriad Pro with KP-fonts package