I have a table with many rows, but only a single column. The column itself is a coefficient for an algorithm, hence just a number.

Currently, when typeset with the longtable package it looks somewhat suboptimal. I wish to typeset it so that the table appears to have two columns with semantics similar to a two-column document layout (text goes top to bottom, left column to right column).

While I could try to emulate the effect manually (by having a two columned table) this would require an immense amount of manual adjustment every time the pagination is changed.

Is there a way of going about this?

Update I've attached an example of what I mean (the image is taken from an old scientific paper). The data itself spans two pages (only the first of which is shown). 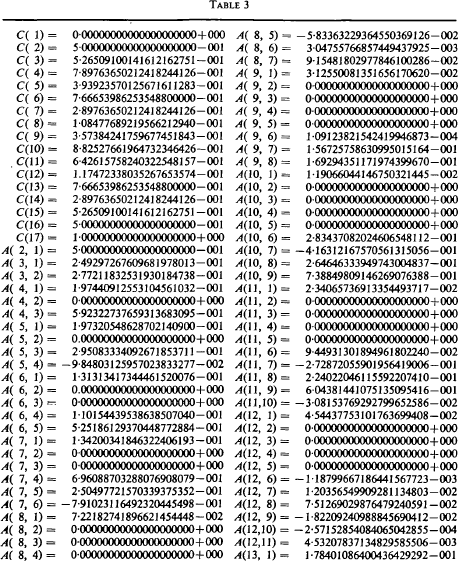 use the tabbing environment instead of a longtable. It can be set in a \twocolumnmode. The first line is killed after defining the tabstops. However, if you can set all lines in \ttfamily, then you need nothing, all will be fine. Alternatively put the first "C(..) = " in a box of a fixed width. The it is also formatted, because all digits are of the same width.

This is a solution utilizing nested tabular environments.

If you generating the coefficients programmatically you will need to device some means for paging. You can also improve on the code above which I kept as simple as possible for clarity by using formatting commands to align the decimal and the sign of the numbers. I have used a macro \Z that uses \phantom to align the numbers in C( 1) with C(10).

Not the answer you're looking for? Browse other questions tagged tables two-column or ask your own question.

4
Table numbering when combining ThreePartTable and “ltabulary”
4
Two column layout with bilingual two tables of contents for each language
1
How to make multi-page tables in IEEEtran format?
1
Single Table with Two columns (tables) in two column article
6
Table for Honey Bee Colony Collapse
3
Table on its own page
1
Centering a left-justified column within a tabular environment
3
Two-column layout with center margin for references, plus footnotes, Bible-style