What do the pieces of LaTeX, \left and \right, respectively mean?

What are their uses and are they even standard?

\left and \right are used for delimiters when they have to change the size dynamically depending on the content. Consider the following example: 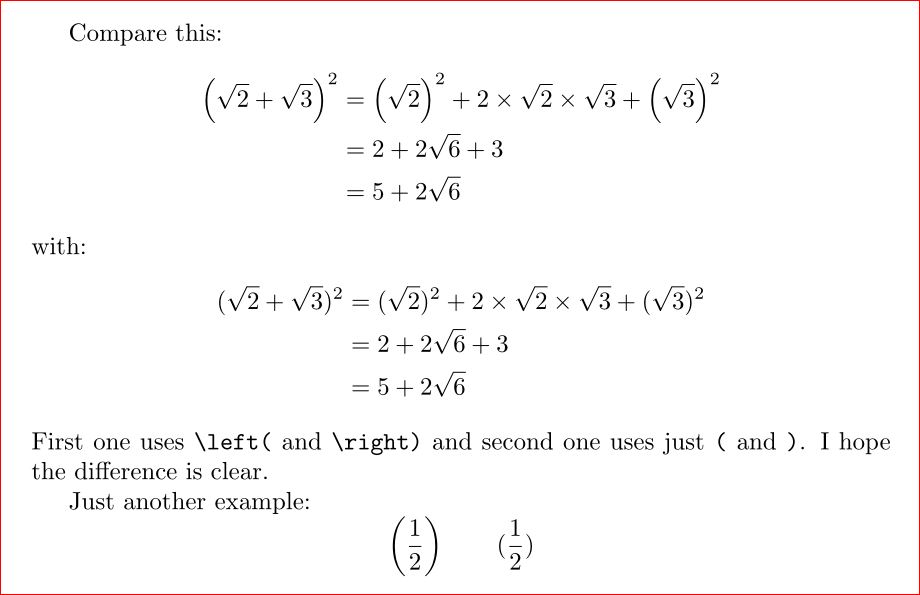 In this particular case, the (\sqrt{2}+\sqrt{3}) with \left and \right gives bit bigger parenthesis making it to look ugly (to some extent) as noted by Enrico. In such cases, proper variant of delimiters (\bigl and \bigr in this case) may be used to get the appropriate height.

For more details, refer to amsmath documentation - page 15, section 4.14 (texdoc amsldoc from command prompt). Here is a screen shot of the same: 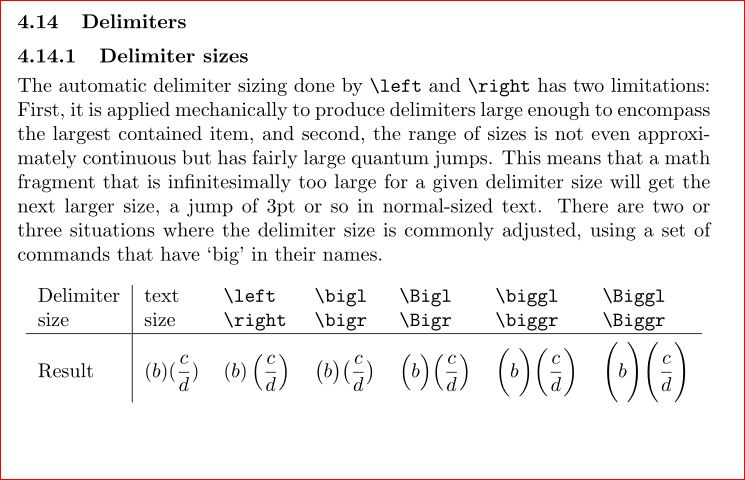 \left and \right are delimiter counterparts and TeX primitives, to be used with so-called "extensible delimiters" in math mode within the same group. This implies two things:

Common or typical uses include

although there is no requirement for the delimiters to be matching. For example, it is fine to use \left\}...\right(, just as long as you use both \left and \right. For example (to mimic amsmath's bmatrix environment),

If you want to use only one of the two, you still need to include the counterpart, but this time with the argument .. That is, either \left. or \right., referred to as the null delimiter. TeX inserts a \nulldelimiterspace for these.

Extensible delimiters are ones that are comprised of a number of fixed and some variable-length parts. For some eye-candy, here's a visual of an extensible }: 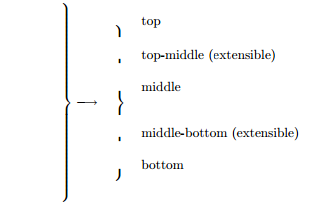 Not the answer you're looking for? Browse other questions tagged math-mode delimiters or ask your own question.

0
how to use \left and \right in latex
18
What is the purpose of "\left.", i.e., "\left" followed by a period?
14
How do I know what symbols/characters are available in a font package?
2
Problem with brackets
2
Why do \left and \right add so much extra space under the baseline?
1
pgfplotstables / amsmath: How to put in group-brackets into a pgfplotstable?
1
I can't change line in equation when I import equation from Mathematica