How to remove line breaks before and after theorems?

By default, in the amsthm package, when you begin a theorem, LaTeX begins on a new line, and when you end the theorem, it also jumps to a new line. How can you prevent this behavior?

In this example, I would like the example text before and after to appear inline with the theorem.

You could define your own shortthm environment: 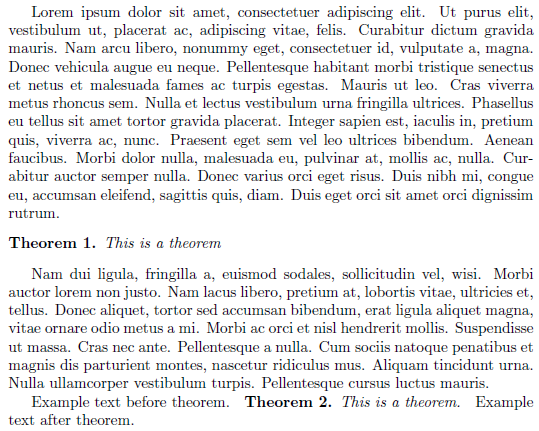 Note that this usage might be confusing to readings, since there is no clear distinction between the theorem body and body text - provided by default when using the line break of amsthm.

The above shortthm is very crude, but could be extended to form part of the creation when issuing \newtheorem{<theorem>}{<title>}. Also, it could also be made a macro, but I kept it in an environment form. The preceding and following text is separated by \enskip; assuming of course that you're not starting a paragraph with it. However, that can also be modified.

Not the answer you're looking for? Browse other questions tagged spacing line-breaking theorems or ask your own question.

6
Bookmark level unknown for first usage of newtheorem
5
How to prevent \cite at the end of the sentence start a new line with a dot
8
Add vertical space before and after framed-theorem environments
2
How to print out only statements (theorems, lemmata, etc) from a tex file?
3
Cite a theorem by its name and number
1
No new line for theorem in enumerate
3
Numbering Theorems/Definitions in Lyx according to Subsection, Line Breaks after Text
1
No space before or after the theorem environment
1
breaking line after “and” in cleveref
3
How to insert a line break after each full stop?