I am typing up a sheet of course problems, and wanted to offset the question numbers from the text of my solutions slightly.

Based upon an answer to this question, I tried adjusting leftskip. The code is below:

The code was fine for its intended purpose on the first page; however, on the second page, it no longer dedented the question numbers in the way I wanted. (They appeared directly above the solution text, despite my using the same commands as on the first page.)

What's going on here? How can I get my desired effect?

@user1296727: please don't take the following remarks personally; one learns from one's own errors and you, as a teacher, know this well. :-)

This is completely against LaTeX philosophy, where logical structures should be marked and then their typesetting can be defined once and for all of them.

There is much less white space, but the numbers in the margin stick out and this is sufficient to give the required emphasis.

Notice the definitions of \divis and \relor: padding the bar with some space helps in distinguishing the object; you're using \lor as a relation symbol, so it's best to tell LaTeX it is.

Never use \\ for producing white vertical space and never separate displayed equations from the text above them; it depends on the text whether it should be separated with a blank line from the text below it. 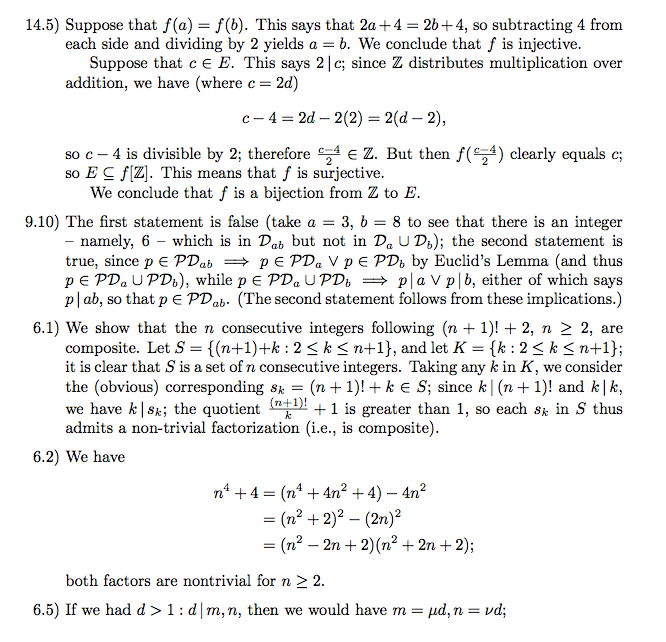 How do we get the labels in the margin? The solution environment wants the label as its argument; then it does \par to be sure about LaTeX's state and adds a vertical spacing (read on for \addvspace). The paragraph is started by \noindent, followed by a box of zero width with its contents pushed to its right margin: since there is no space, the text will stick out on the left.

The \ignorespaces is needed because otherwise the end-of-line in

would create an extra space which would go in front of "Suppose"; so we kill it.

At the end of the environment, \par ends whatever paragraph was being built and issues another vertical space. However, \addvspace is used, so two consecutive solution environments will be separated by just one of those vertical spaces. In general, when two \addvspace are next to each other, the maximum amoung wins.

If you prefer that the solution text is indented (which I don't recommend), you can use the same code as before, just changing the definition of solution, for example with the help of the enumitem package:

This should show why it's better to use "logical structures", instead of marking manually the spacings and everything else. A mock paragraph has been added to show the result. 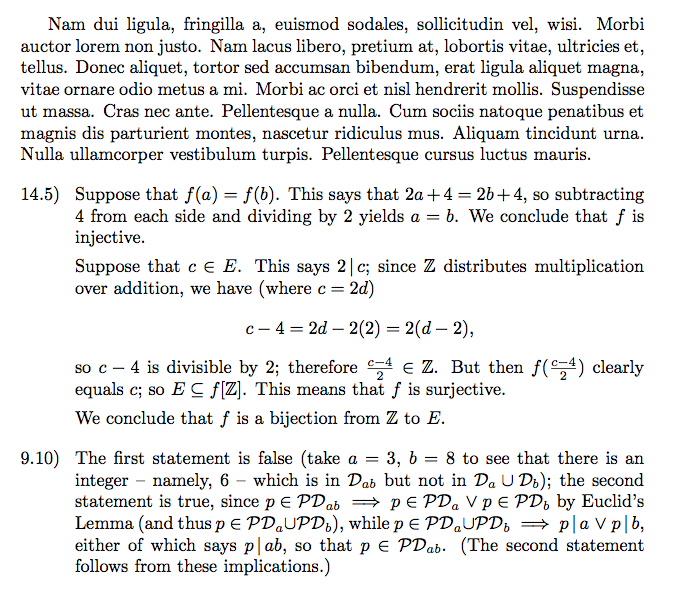 About \leftskip: TeX typesets a paragraph with only one value of \leftskip, namely the one which is current at the end of the paragraph. With

I'm not sure why this happens, but what is clear is that this is a very awkward method. Surely you would be off better using an itemize environment (see section 2.11.1 of the Not so Short Guide to LaTeX for details). In my opinion, starting the text below the numbers does not look very good. Nevertheless, it is not difficult to achieve this.

Not the answer you're looking for? Browse other questions tagged horizontal-alignment or ask your own question.