This isn’t the first time this question was asked but the other solutions don’t work in my case. 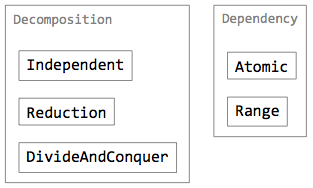 It was created using this code:

Needless to say, this code is horribly complicated and has no automation (for example, the width of the borders isn’t auto-computed to fit all elements, but rather put in by hand via painstaking trial and error).

There must be an easier way to achieve this.

In particular, I have two questions:

Question 1 is the important thing here, though. Question 2 is more of a general question that crops up again and again …

For the first point, you can use the fit library.

For the second: According to the manual, setting below also sets anchor=north. So adding anchor=west to typetag and then setting typetag after below does the trick.

(inner sep, should probably be adjusted a bit) 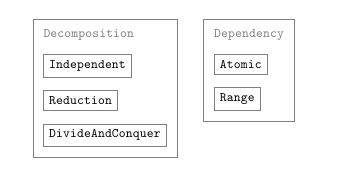 Here it is the same with only \fbox and automatic calculation of the box sizes can also be used inside of tikz. If you need connections, you can set single nodes of the box contents.

Here you have another option with matrix. You can 'draw' the matrix node, so don't need to use a fitting node. I could not declare titles with label (may be someone knows how to do it) but with another node anchored to matrix.

Here you have the result:

25
In TikZ, is it possible to nest nodes?
8
How to put nodes or rectangles inside a node?
4
Tikz diagram: subnodes
1
Structure / Figure / Table with multiple rows and different shades of grey (Similar to provided one)

4
Draw inside nodes to get BPMN gateway shapes
6
How to share selected options between different nodes in TikZ?
16
Numerical conditional within tikz keys?
4
Size of circle path vs. circle node in \pgfdeclareshape?
6
TikZ/ERD: node (=Entity) label on the inside
3
tikz/pgf: positioning.lib works correct in combination w/ rotate?
3
How to align node anchors on text?
1
Tikz Node Style: half square, half ellipse
2
Document header with tikz