Fill between two curves in pgfplots.

How to accomplish fill between two curves in pgfplots? For example, I have

and I would like to have filling between those curves.

You can use the \pgfplotstablevertcat command to add the coordinates to your data and then just use the fill option when plotting: 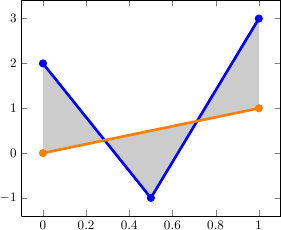 Version 1.10 of pgfplots has been released just recently, and it comes with a new solution for the problem to fill the area between plots.

Note that the old solution is still possible and still valid; this here is merely an update which might simplify the task. In order to keep the knowledge base of this site up-to-date, I present a solution based on the new fillbetween library here: 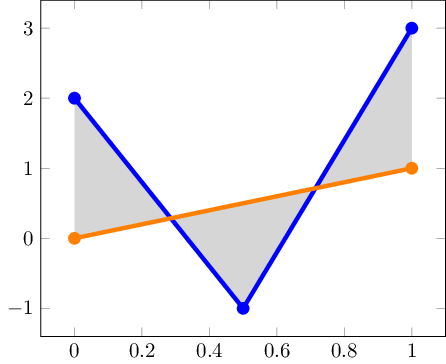 The solution relies on \usepgfplotslibrary{fillbetween} which activates the syntax \addplot fill between[of=<first> and <second>]. The style for the filled region is given in the option list as usual, it is gray!40. Note that the fill between segment will automatically be drawn on a separate layer, i.e. it is behind the main paths. Note that fill between is independent of the sampling density, the input type, and even the plot handler of the two input paths.

39
Fill the area between two curves calculated by pgfplots
45
pgfplots: prevent single plot from being listed in legend
36
Is there an easy way of using line thickness as error indicator in a plot?
13
PGFplots 3d: Creating a filled solid of revolution
15
Filling region between two \draw Tikz
8
Fill area of curve above a line using pgfplots
5
shading Plots with other format
3
pgfplots: drawing areas from a table starting “above” an axis