Is it possible to have the numerical entries aligned by their decimal, while controlling the text entries' alignment as it relates to the decimal marker?

To complicate things further, is it possible to apply alignments differently row by row? In particular, could I leave column-centered alignment for the head entry of a column, while making my special decimal marker-based alignment apply to later entries?

The following MWE sort of produces what I want with exaggerated numbers, but I have manually forced some space in the last two entries to make it happen. I want to not have to do this. 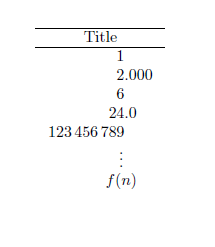 Note that I do want a centered title, and that ideally I actually want the remaining text entries centered with respect to a point that is roughly 0.5\ex to the left of the decimal marker. Also, note that since I have such asymmetry between integer an fractional parts, I do not think that table-number-alignment=center-decimal-marker is helpful.

Let me say two things before:

† This works now, thanks to Peter Grill's question, Martin Scharrer's answer and Peter's hint in the chat.

You can add another \textcenter macro that takes three arguments: 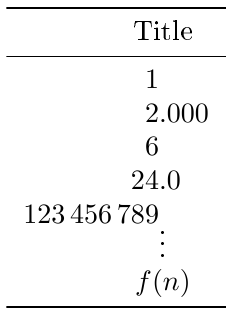 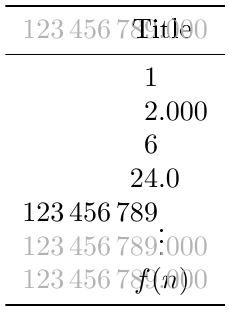 Not the answer you're looking for? Browse other questions tagged horizontal-alignment siunitx or ask your own question.

6
siunitx: centering table headings (or other text contents)
3
Paragraph column in tabular working only in the first column
4
How to create equally spaced columns in a table with centered number blocks, which themselves are aligned on the decimal marker?
6
ctable and siunitx: Last column does not center correctly (possible incompatibility?)
2
aligning numerical data in columns on decimal marker
16
Print “< .001” in table with siunitx
3
Problem aligning decimals in multi-column table
0
siunitx: horizontal alignment of rows with integers, non-integers with variable number of decimals, “surrounding material”, and brackets