I found from http://jblevins.org/notes/latex that I could use the independence symbol:

I was wondering how this works. Can anybody explain? I don't know the commands mathpalette, rlap, and mkern2mu.

Specific to your question about how this works: 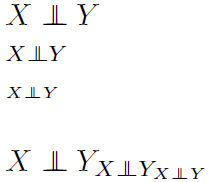 The use of \mathpalette - defined internally as a specialized \mathchoice - allows the input to do defined in a way that captures the current math style. Note that there are four different math styles: \displaystyle, \textstyle, \scriptstyle and \scriptscriptstyle.

The above MWE shows how the single command \independent scales to regardless of where it's used, all because of a nifty use of \mathpalette and a helper macro \independenT. The helper macro captures the current math style and re-uses it inside an \rlap. The double use of the symbol is just for spacing purposes, adding to the \mkern insertion. That is, it sets the symbol \perp (of width 0pt and right overlap), inserts of 2mu kern (pushing the "cursor" to the right 2mus) and then inserts the symbol again. Since the symbol is set in the same style, the horizontal bar overlaps, but the vertical bar is spaced 2mu apart. As a final take on mathematical spacing, the entire symbol is set as a relation using \mathrel.

One can also use

Just turns \models symbol for 90 degrees. You can also try \vDash. It is smaller than \models

For playing with vertical aligning use \raisebox{}{}

You can use the \upvDash symbol from the mdsymbol package. For more information please check The Comprehensive LaTeX Symbol List

Not the answer you're looking for? Browse other questions tagged math-mode math-operators or ask your own question.

2
\perp with two vertical lines
79
What are the possible dimensions / sizes / units LaTeX understands?
38
The mysteries of \mathpalette
19
Not independent Sign in Latex
0
Double perpendicular symbol in *KaTex* for notion

12
Where do I find character codes to make my own "big symbols"?
7
typesetting according to the German traditions/standards for mathematical content
10
Empty clause symbol
14
Symbol for m by n matrix
13
Symbol for anamorphism
2
Where are basic mathmode symbols stored
6
Perpendicular symbol with litle square