Alignment of page numbers in table of contents

In other words, if this document was RTL, which of the followings would be the correct alignment of page numbers?

In my opinion, the alignment of the numbers has nothing to do with the direction of the text.

If you were to use a numeral system that was "sort of" LTR, whatever the direction of the text, the logic would be to align the digits on their left edge. 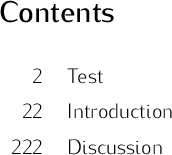 but the page numbers would usually still be aligned on their right edge for readability (even if that degrades the page grid to some extent).

As far as I can remember, in Hebrew typesetting it is customary to align page numbers by the rightmost digit, that is, as in Vafa's second option. See, e.g. here or here. However, Microsoft Word aligns to the end-of-line (Vafa's first option).

5
Page number on the left with book class
4
List of equations, including equation contents and caption
6
list of figures and tables when there are no figures or tables?
2
LyX: Add contents line with specific line number in ERT
1
Alignment in Table of Contents
1
Beamer TOC: Right-align section numbers